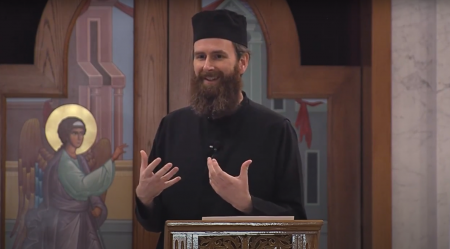 His Eminence, Metropolitan Joseph of the Antiochian Orthodox Christian Archdiocese of North America (AOCANA) has appointed The Right Rev. Archimandrite Jeremy Davis as His Eminence's new hierarchical assistant. Father Jeremy, an alumnus of St. Vladimir's Seminary, began his new position September 1, 2021, and will assist the metropolitan with archdiocesan administration and overseeing its offices in Englewood, NJ.

Achimandrite Jeremy was born in Iowa in 1976 and raised in Wichita, KS. He and his family were active members of Evangelical Protestant churches. During his high school years, he felt a calling to Christian ministry and subsequently enrolled as a religion major at Friends University in Wichita. In his final year of college, Fr. Jeremy attended Divine Liturgy at St. George Orthodox Cathedral in Wichita at the suggestion of a friend. Though he knew next to nothing about Orthodoxy, he was left in wordless wonder by the experience of its rich theology and genuine spirituality, as they came to life in the piety and love of this parish community. After a period of catechism he was chrismated on Holy Saturday in 1998. Father Jeremy enrolled at St. Vladimir’s Orthodox Theological Seminary in 2001 and graduated as class valedictorian with a Master of Divinity degree in 2004.

Archimandrite Jeremy was ordained deacon by His Grace, Bishop Basil at St. George Cathedral on January 1, 2006. He worked fulltime at the Cathedral until being ordained priest there (also by Bishop Basil) on July 16, 2006, at which time he was reassigned to St. Elijah Church in Oklahoma City. On March 13, 2016 Fr. Jeremy was assigned as pastor of Holy Ascension Church in Norman, OK. On March 19, 2017, he was elevated to the rank of Archimandrite by His Grace, Bishop Basil. Father Jeremy is a tonsured monk, belonging to the Monastic Brotherhood of St. Silouan the Athonite within the Diocese of Wichita.

May God grant The Right Rev. Archimandrite Jeremy many years!