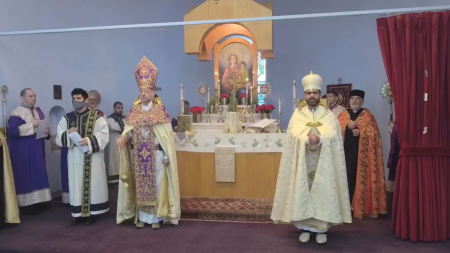 In recent weeks two alumni of St. Vladimir’s Seminary, Dns. Timothy Aznavourian and Michael Sabounjian, were ordained to the priesthood for the Armenian Church’s Eastern Diocese of America.

Deacon Timothy, now Priest Nigoghos (Nicolas), was ordained May 28 and 29, 2021 through the hand of His Grace, Bishop Daniel Findikyan at St. Mark Armenian Church, Springfield, MA. The occasion was a historic one, marking the first time an American-born deacon has been ordained to the Armenian priesthood by an American-born bishop.

Bishop Daniel also presided over the ordination of Dn. Michael, who was ordained to the priesthood June 4 and 5, 2021 at Holy Resurrection Church in New Britain, CT. Father Michael had been serving there as deacon-in-charge. His father, Fr. Krikor Sabounjian, served as sponsoring priest during the ceremonies.

Father Nigoghos Aznavourian was born in Boston to parents David and Patricia Aznavourian. Baptized as Timothy, he grew up in Malden, MA, later moving to Rhode Island as a young adult. He is a 2020 graduate of St. Nersess Armenian Seminary and St. Vladimir’s Orthodox Theological Seminary. He also received a Bachelor of Arts in Philosophy from Rhode Island College.

Father Michael Sabounjian, a native of the Holy Translators parish in Framingham, MA, is a graduate of Boston College, St. Nersess Seminary, and St. Vladimir’s (’18). Following graduation he served a pastoral internship at the Sts. Sahag and Mesrob Church of Providence, RI, under the tutelage of Fr. Shnork Souin.

The community of St. Vladimir’s Seminary wishes the newly ordained Priests Nigoghos and Michael and their families many years!

Information and photos were obtained from ArmenianChurch.us.