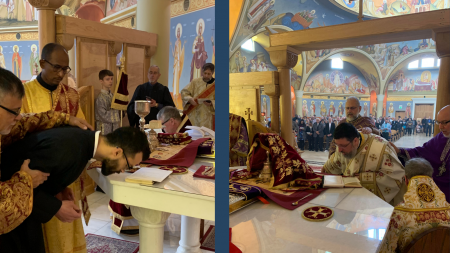 Over the first weekend of April, a new priest and deacon were added to the ranks of St. Vladimir's Seminary's alumni and student body: Priest Joseph Olas and Dn. John (William) Vazquez. Both ordinations took place by the hand of His Grace, Bishop Anthony (Antiochian Archdiocese) at St. George Orthodox Christian Church, Fishers, IN—Fr. Joseph's on Sunday, April 3, 2022 and Dn. John's the day before on April 2. 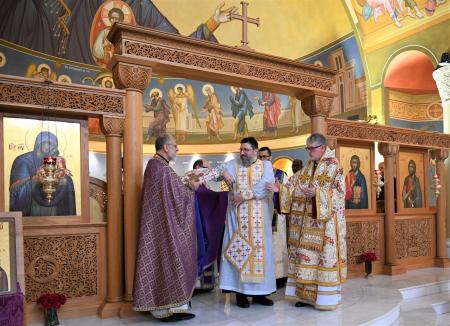 Leading up to his ordination to the priesthood, the Rev. Joseph Olas had been serving as deacon and pastoral assistant at St. George since 2016. He grew up in that parish, where his father, the late Very Rev. Fr. O. Joseph Olas (+1997) served as pastor from 1981 to 1995. Father Joseph is a graduate of Indiana University as well as St. Vladimir's Seminary. He completed his M.A. at the Seminary in 2010. He has also served as pastoral assistant at St. Michael Orthodox Church, Louisville, KY and outreach director at the Orthodox Christian Network (OCN). 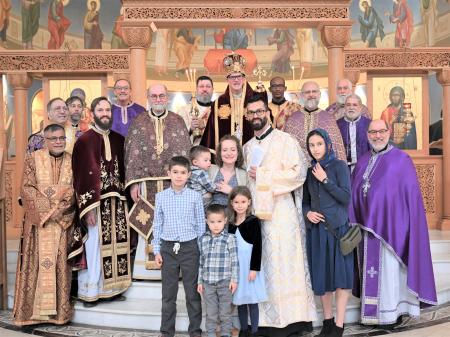 The Rev. Dn. John Vazquez is a second-year seminarian in St. Vladimir's M.Div. program. He is a former professional baseball player and coach, and holds a B.A. in history from Kent State University (2007). Before coming to seminary, Dn. John, his wife Hannah, and their five children attended St. George in Fishers. Dn. John and Hannah's were raised in the Indianapolis area, where both their families were part of the Evangelical Orthodox Church (EOC) movement started by the late Fr. Peter Gillquist (+2012) and others. (Many members of the EOC were received into the Antiochian Orthodox Christian Archdiocese of North America in the late 1980s.) Hannah currently hosts the Ancient Faith Radio podcast, All These Things.

May God grant the newly ordained Fr. Joseph and Dn. John and their families many years! AXIOS!