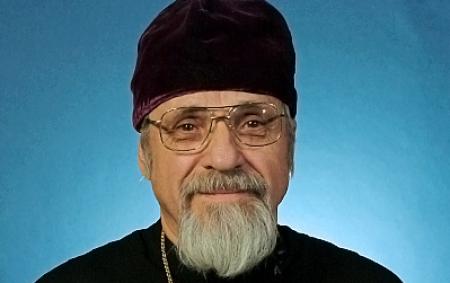 With faith in Christ and hope in the resurrection, we share the news of the repose of Archpriest Eugene Tarris, who fell asleep in the Lord on Friday, January 13, 2023 at the age of 88.

Father Eugene was born on July 24, 1934, in Simpson, PA. His grandparents on both sides emigrated from Galicia in the Austro-Hungarian Empire. Father Eugene was a high school valedictorian, with an interest in science, and a 1956 graduate of Penn State University. After college, he worked in the aerospace industry until entering Saint Vladimir’s Orthodox Theological Seminary (M.Div. ’67). While traveling on a choir trip, he met his future wife, Sonia Katherine Reshetar, whom he married at Saint Vladimir’s on September 5, 1965. He was ordained to the priesthood by Metropolitan Ireney at Saint Sergius of Radonezh Chapel, Syosset, NY on July 4, 1966.

Father Eugene had a long and fruitful ministry, serving parishes in Dix Hills, NY, Los Angeles, CA, Dallas, TX, Garfield, NJ, Auburn, NY, San Diego, CA, Temecula, CA, and Littleton, CO. He also served as a chaplain for the Marines at Camp Pendleton. Following his retirement, in 2001, he was assigned as an assistant priest at Holy Transfiguration Cathedral (Denver, CO) and awarded the jeweled cross. During these years of service to the Church, Father was also employed as an aerospace engineer, and found time to pursue graduate studies in Biblical languages. His interest in languages is notable, as for years he has been carefully translating the famous Handbook for Church Servers, originally published in 1900 by Sergius Bulgakov. In recent years, Father Eugene was attached to Saint Mary’s Cathedral, Minneapolis, MN.

Father Eugene and Matushka Sonia had four children: Theodore, Faith, Christopher and Michael. Matushka Sonia reposed in the Lord on June 10, 1994. Fr Eugene reposed on January 13, to be laid to rest with Matushka by the Annunciation Chapel at Saint Mary’s Cathedral Cemetery, Minneapolis, MN.

May Father Eugene’s memory be eternal!