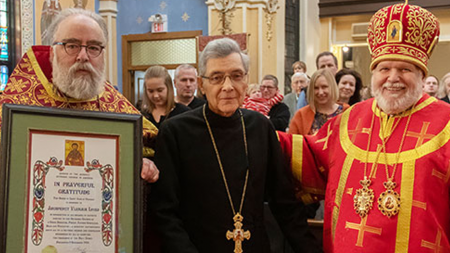 With faith in Christ and hope in the resurrection, we share news of the repose of Archpriest James Doyle, who fell asleep in the Lord January 12, 2021, at the age of 80.

He was born on August 2, 1940, to James and Marion Doyle, in Providence, RI, and is survived by his sister, Rose, of North Providence.

He took classes at St. Vladimir's Seminary between 1958 and 1962. He then enlisted in the United States Army, in which he served until 1967. Among his other duties, he studied Russian and other Slavic languages in the Army's language schools.

After his Honorable Discharge from the Army he went to Paris, France, to study at Saint Sergius Theological Institute, from which he graduated in 1969, with additional studies at Université catholique de Louvain, Belgium. While at Saint Sergius, he worked closely with Father Nicholas Afanasiev, the noted Orthodox theologian.

Father James was ordained to the Diaconate on June 25, 1969 at Saint Sergius, and then to the Priesthood, on June 28, 1969 at Saint Alexander Nevsky Russian Orthodox Cathedral, Paris, by Archbishop George, of Syracuse. Over the years of his ministry, he received a number of special recognitions, including his elevation to archpriest, and his award of the Jeweled Cross.

After his ordination he served parishes in Brussels, Belgium, until his return to the United States in 1975 to teach patristics and Old Testament at Saint Tikhon's Orthodox Seminary, South Canaan, PA. He served at Holy Trinity Cathedral, Leavitt Street, Chicago, from 1979, concluding his ministry there as its dean, in 1983. From 1983 until his death he was on staff at Catholic Theological Union, Chicago, fondly remembered there by a generation of fellow staff, faculty, and students.

He assisted at a number of parishes in the Greater Chicago area over the years, for the last twenty years serving in the Greek Orthodox Archdiocese. Of very special note was his service at Assumption Church, Hegewisch, from 2004 to very shortly before his death. Of all his pastoral ministries, none was closer to his heart. He was deeply loved by the congregation, there, and it was, for him, a cherished spiritual home.

With the blessing of His Eminence, Archbishop Paul, Fr. James will be buried from the parish he served, Holy Assumption, by His Eminence, Metropolitan Nathanael of the Greek Metropolis of Chicago.

Services will be at Assumption Greek Orthodox Church in Hegewisch, IL. A wake will be held Monday, January 18 from 4 p.m. to 8 p.m. On Tuesday, January 19, Orthros begins at 8 a.m., followed by Divine Liturgy.

May the memory of Fr. James be eternal!

(This article was adapted from OCA.org)