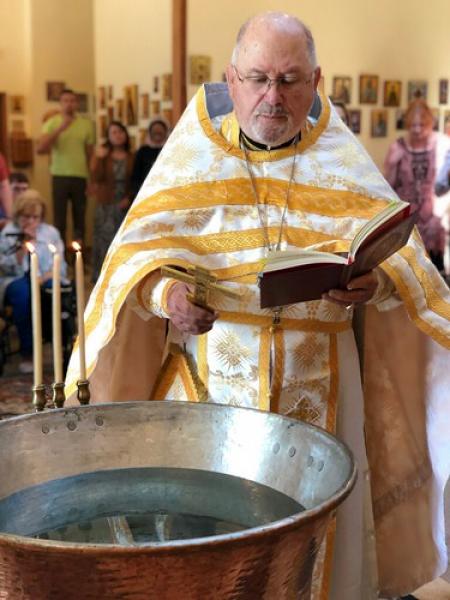 With faith in Christ and hope in the resurrection, we share news of the repose of Alumnus Archpriest Nicholas Neyman, who fell asleep in the Lord Sunday, December 12, 2021 after a brief illness.

The Very Rev. Nicholas Neyman moved to Crestwood, NY in the 1960s with his wife, Khouria Malvi, to attend St. Vladimir's Seminary. Father Nicholas studied in the Master of Divinity (M.Div.) program from 1966 to 1970, and was ordained to the Holy Priesthood in the Antiochian Orthodox Christian Archdiocese of North America (AOCANA).

Father Nicholas and Kh. Malvi are known and beloved especially for their longtime ministry at Camp St. Nicholas in Frazier Park, CA, where they spent twenty-four years. As they oversaw the Camp, the Neymans began traveling 100 miles each way to serve at Holy Cross Church in Palmdale, CA, which they helped establish. Over the course of his priestly ministry, Fr. Nicholas also served as pastor of St. Mary Orthodox Church of West Palm Beach, FL. Following retirement, Fr. Nicholas served at St. John the Baptist Church in Post Falls, ID.

May the memory of Fr. Nicholas be eternal!