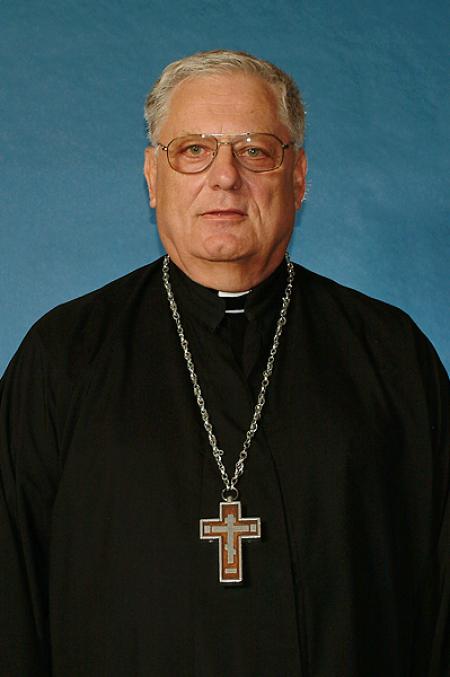 With faith in Christ and hope in the resurrection, we share news of the repose of Archpriest Peter Pawlack, who fell asleep in the Lord on April 19, 2021.

Father Peter was born in Mayfield, PA the son of the late Julia (Hadginske) and Peter J. Pawlack. A younger sister and only sibling recently fell asleep in the Lord.

He graduated from (Eastside) New Jersey High School, attended Rollins College in Winter Park, FL and subsequently transferred to Rider College (now Rider University) in Lawrenceville, NJ to continue his undergraduate studies. He received his undergraduate degree in Commerce and Industrial Management from Rider College. In the fall of 1962 he entered St. Vladimir’s Orthodox Theological Seminary.

In June of 1964 he and the former Barbara Rugala were married by the late Archpriest Dimitri Ressetar, Archpriest John Meyendorff and Archpriest Paul Shafran at St. John’s Orthodox Church, Mayfield, PA.

On October 10, 1964 Fr. Peter was ordained to the Holy Diaconate at St. Vladimir’s Seminary Chapel by the late Archbishop John of San Francisco. Four months later on February 15th he was ordained to the Holy Priesthood at Protection of the Holy Virgin Mary in New York City by the late Archbishop Ireney of Boston. Upon completion of his Bachelor of Divinity degree from St. Vladimir’s Seminary in the spring of 1965 he was assigned to St. Mary’s Church in Waterbury, CT.

While serving as pastor of St. Mary’s Church, Fr. Peter advocated the use of the English language in an era when Church Slavonic was still quite prevalent. He served as spiritual advisor to the Atlantic District Eastern Orthodox Christian Education Association and the Atlantic District FROC, secretary of the Diocese of New England, and university Chaplain for the New England Diocese.

He returned to St. Vladimir’s Seminary in 1967-68 and completed requirements for the Master of Divinity degree which was awarded in May of 1968.

In June of 1968, Fr. Peter was assigned to St. John the Baptist Church, Warren, OH, where he served as pastor for 38 years.

He has also served as secretary of the OCA Pension Board, chairman of the Cleveland Deanery Publications Committee, and was a member of the Howland Clergy Association.

Father Peter was elevated to archpriest in 1977 and awarded the Jeweled Cross by the Synod of Bishops in 1990.

Prior to his retirement Fr. Peter served as dean of the Ohio Deanery from 2004 to 2006. He retired from St. John the Baptist Church in August of 2006. During his retirement years he was a substitute priest as needed in parishes of the Ohio Deanery and for the last six years served Sunday Liturgy at the Orthodox Monastery of the Holy Transfiguration in Ellwood City, PA.

He is survived by his wife of 56 years, Barbara, two sons, Peter III and Gregory (Ruth Ann Bowers), and two grandchildren. His parents and only sister preceded him in death.

Final arrangements are by Peter Rossi & Son Memorial Chapel, 1884 North Road, Warren, OH. All services will be held at the Orthodox Monastery of the Transfiguration with the committal service at the Monastery Cemetery.

Public services and visitation times are as follows:

Clergy and faithful who wish to attend any of the above services should call the monastery to make a reservation, at 724-758-4002. Attendance will be limited due to COVID-19 restrictions. Masks and distancing will be required.

All services will be live streamed on the monastery YouTube channel.

In lieu of flowers, the family requests any donations to be sent to the Orthodox Monastery of the Transfiguration, 321 Monastery Lane, Ellwood City, PA 16117.

May the memory of Fr. Peter be eternal!