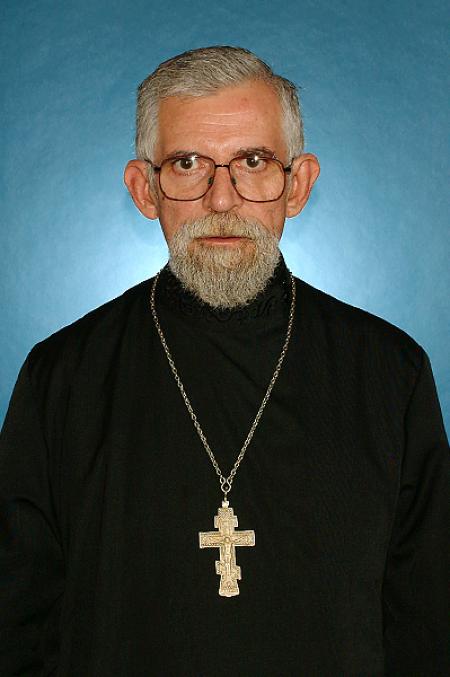 With faith in Christ and hope in the resurrection, we share news of the repose of Archpriest Stephen Janos, an alumnus of St. Vladimir's Seminary. Father Stephen fell asleep in the Lord on Saturday, August 7, 2021 at his residence in Mohrsville, PA.

The Very Rev. Stephen Janos was born in Lebanon, PA, to the late Anne (née Marko) and Stephen J. Janos, Sr. He graduated from Reading Central High School in 1965, and earned his Bachelor’s degree in Humanities, followed by a Master’s degree in Philosophy, from Villanova University. He then studied at St. Vladimir’s Orthodox Theological Seminary.

Father Stephen was ordained to the Holy Priesthood on May 8, 1982, by His Grace Bishop Ireney of the Patriarchal Parishes of the Russian Orthodox Church in the USA.  He was received into the Orthodox Church in America on May 13, 1998, by His Beatitude, Metropolitan Theodosius. He was subsequently assigned as chaplain at Ss. Cosmas and Damian Home in Staten Island, where his wife was also employed on staff. On January 22, 2003, he was transferred to Saints Peter and Paul Church in Buffalo, NY; he was named rector of the parish a year later, and served the community there faithfully until his retirement on July 31. 2011. Father Stephen had been elevated to the rank and dignity of Archpriest and been given several ecclesiastical awards, including the palitza.

In the late 1990’s, Father Stephen translated 1,500 pages from Russian of The Lives of the Saints which vastly expanded the extent of this material for English readers. He has in print more than ten books devoted to Russian religious philosophy, primarily of the noted Russian émigré philosopher Nicholas Berdyaev. Father Stephen was well respected in academic circles as a scholar and translator.

Father Stephen was the husband of the late Matushka Suzanne E. (née Plotar) Janos, who fell asleep in the Lord on February 8, 2004. He is survived by his devoted son Andrew M. and daughter-in-law Bonnie L. Janos of Herndon, VA, and two granddaughters, Madelynn and Jocelyn Janos.

The schedule of services for Fr. Stephen is as follows:

A viewing will be held on Tuesday, August 10 from 6 p.m. to 8 p.m. at the Leibensperger Funeral Home, 223 Peach Street, Leesport, PA. There will be a Parastas Service at 7 p.m. at the funeral home.

Family, diocesan clergy, and former parishioners will be present on Friday, August 13, for a viewing at Ss. Peter and Paul Church, 45 Ideal Street, Buffalo, NY, where the Service for the Burial of a Priest will be celebrated at 6:30 p.m. by His Eminence, Archbishop Michael and area clergy. A Divine Liturgy, followed by a Litiya, will be served on Saturday, August 14, by Archbishop Michael and attending clergy, beginning at 10 a.m.

Following divine services at Ss. Peter and Paul Church, Fr. Stephen will be buried next to his beloved wife at St. Matthew’s Cemetery in West Seneca, NY.

May the memory of Archpriest Stephen be eternal!

This article has been adapted and reprinted from OCA.org.