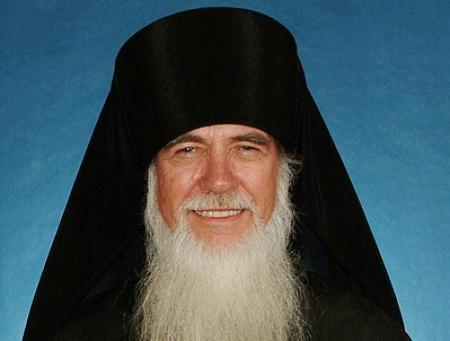 With faith in Christ and hope in the resurrection, we share the news of the repose of His Grace Bishop Tikhon (Fitzgerald), former Bishop of San Francisco, Los Angeles, and the West of the Orthodox Church in America.

Stephen Fitzgerald was born on November 14, 1932, in Detroit, Michigan. On December 18 of the same year, he was baptized in the Lutheran Church. He attended St. Olaf College from 1952 to 1954 and graduated from Wayne State University, Detroit, in 1958. He served in the U.S. Army from 1954 to 1957. He was received into the Orthodox Church through Chrismation in September 1960, at the Lackland Air Force Base Chapel by Fr. Peter Zolnerovich. He re-enlisted in the U.S. Air Force as a commissioned officer from 1960 to 1965, and again from 1966 to 1971. In the academic year 1965-1966, he studied at St. Vladimir's Orthodox Theological Seminary.

Bishop Dmitri ordained him to the Holy Diaconate in December 1971 at St. Nicholas Orthodox Cathedral, Washington, D.C., after which he was transferred to Los Angeles in 1972, where he served at the Holy Virgin Mary Cathedral as Deacon, and then Protodeacon, until 1978. Bishop Gregory of Alaska ordained him to the Holy Priesthood in 1978 to continue serving the Cathedral as second priest; and he became the Rector of the Cathedral in December of 1979, maintaining that responsibility until his election as Bishop of San Francisco. The Holy Synod elevated him to the rank of Archpriest in 1982.

After nomination as Bishop of San Francisco at the Extraordinary Diocesan Assembly held in San Francisco’s Holy Trinity Cathedral on March 12, 1987, Fr. Stephen was elected Bishop of San Francisco by the Holy Synod of the Orthodox Church in America on March 17, 1987. On the eve of the Feast of the Annunciation, he was tonsured a monk with the name of Tikhon at St. Tikhon’s Monastery, South Canaan, Pennsylvania, and elevated to the rank of Archimandrite on Lazarus Saturday at Christ the Savior Church in San Francisco by Bishop Job, the Temporary Administrator of the Diocese of the West.

His Grace served as ruling hierarch of the Diocese of the West for nearly two decades from 1987 to 2006. In retirement, Bishop Tikhon lived quietly at Holy Virgin Mary Cathedral in Los Angeles, where he had resided since his assignment there as a deacon in 1972.  While his health permitted, His Grace prayerfully and unassumingly attended the divine services at the cathedral, where he was beloved and esteemed.

May the memory of His Grace Bishop Tikhon be eternal!