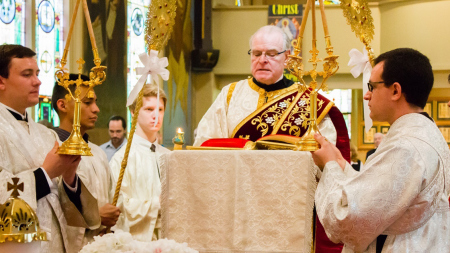 With faith in Christ and hope in the resurrection, we share news of the repose of Protodeacon John Eby. Protodeacon John, 73, longtime assistant manager of the Seminary Bookstore and alumnus of St. Vladimir’s Seminary, fell asleep in the Lord unexpectedly at his home in Bronxville, NY.

Protodeacon John was born in Lansing, MI on December 8, 1947. Raised as an Episcopalian, he was received into the Orthodox Church during his time at Michigan State University. He graduated from MSU with a Bachelor of Arts degree in interior and architectural design in 1970. He went on to earn a Master of Divinity degree (M.Div.) at St. Vladimir’s Orthodox Theological Seminary in 1977.

Protodeacon John belonged to Holy Trinity Church, Yonkers, NY for four decades. He served the parish first as a devoted layman and then, for the past 22 years, as their parish deacon, retiring recently from active diaconal service. He was ordained to the diaconate on August 15, 1999 by His Eminence, Archbishop Peter (L'Huillier) and elevated to the rank of protodeacon at Holy Trinity Church on December 22, 2013 by His Eminence, Archbishop Michael. He was awarded the right to wear the kamilavka in 2016.

During his professional career, Pdn. John worked as an interior designer in Detroit before relocating to New York, where he worked for Royal Copenhagen and then Asprey of London. After retiring from his previous career, he began working at St. Vladimir’s Seminary Press and Bookstore, where he served as assistant manager up until his passing.

John is predeceased by his parents, F. Eugene Eby and Zetta Zoss Eby. He is survived by many generations of dear friends across several countries and many godchildren. He was full of faith, joy, and love, and he will be deeply missed by all who knew him.