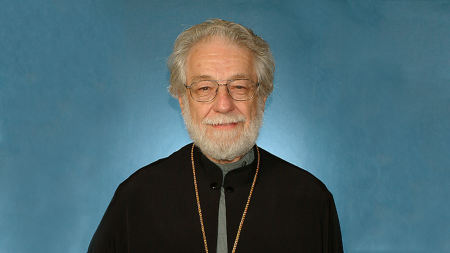 With faith in Christ and hope in the resurrection, we share news of the repose of Protopresbyter Daniel Hubiak, former Chancellor of the Orthodox Church in America (1973-1988) and former OCA Representative to the Moscow Patriarchate (1992-2001). Father Daniel fell asleep in the Lord Friday, February 5, at the age of 94.

Father Daniel Hubiak was born on December 29, 1926 in Akron, OH to Archpriest Afanasy and Susan (Wanchisen) Hubiak, where his father was the founding pastor of St. Nicholas Church. After serving in the US Army, he graduated from Columbia University and St. Vladimir’s Seminary (then in New York City) in 1951. On September 16, 1951, he married Evdokia (Dunia) Martynuk of Brooklyn, NY. Metropolitan Leonty (Turkevich), Primate of the Russian Orthodox Greek Catholic Church of North America (informally known as the Metropolia and precursor to the Orthodox Church in America) ordained Fr. Daniel to the Holy Diaconate on September 21, 1952 and to the Holy Priesthood on September 27, 1952. He was then assigned as assistant pastor at Holy Trinity Church in Detroit, MI until June of the following year, when he was transferred to Holy Assumption Church in Marblehead, OH, where he would serve as pastor for more than two years. On July 17, 1956, he was assigned as assistant pastor at Holy Transfiguration Church in Brooklyn, NY, where he would remain for another two years.  Subsequently, on June 1, 1958, he was appointed pastor of Holy Trinity Church in East Meadow on Long Island, NY. There, during his more than a decade-long pastorate, he would lead the community in the construction of its new church building.

With the creation of the positions of chancellor, secretary, and treasurer for the Metropolia at the 11th All-American Sobor in 1963, Fr. Daniel was invited to become the treasurer for the Church while continuing his pastoral work as rector of the East Meadow parish. This work required his frequent presence at the chancery offices, then located at Holy Virgin Protection Cathedral in Manhattan. Father Daniel exerted much effort to make the finances stable and to provide accountability to the Church. In May 1970, he was named to the seven-member delegation assigned to travel to Moscow to receive the Tomos of Autocephaly for the Orthodox Church in America. In August of that year, he participated in the glorification services in Kodiak of St. Herman of Alaska, North America’s first Orthodox saint.  Finally, in October 1970, he was a delegate to the historic 1st All-American Council of the new autocephalous Church.

After the Council, Fr. Daniel was asked to take on additional responsibilities within the Church administration by serving as secretary. At this point, after twelve years in East Meadow, he relinquished his parish responsibilities to devote his energies fully to labors in two of the three officer positions of the OCA. Effective December 1, 1970, he was assigned to St. Sergius Chapel at the Metropolitan’s Residence, located in Syosset, NY. When he was not traveling in fulfillment of his chancery responsibilities, Fr. Daniel would provide pastoral care for members of the chancery staff and other faithful attending services there for nearly two decades. He would continue as secretary-treasurer for the Church for three years, until he was named OCA chancellor in November 1973 to succeed Protopresbyter Joseph Pishtey, who had reposed a year earlier. Father Daniel was the only person to hold at some point each of the three officer positions of the OCA since their establishment in 1963. In fact, during the late 1970s, Fr. Daniel managed the duties of all three offices simultaneously, as the positions of secretary and treasurer were vacant for several years.  In his role as chancellor, Fr. Daniel was the key assistant for Metropolitans Ireney (Bekish) and Theodosius (Lazor), especially in facilitating the smooth functioning of the Holy Synod, the All-American Councils, and the Metropolitan Council as well as the growing number of various Church departments and commissions and the chancery offices.  In 1974, he oversaw the transfer of the Chancery offices from Holy Virgin Protection Cathedral in New York City to Syosset, NY.

In 1988, Fr. Daniel and Matushka Dunia returned to parish ministry when he left his position as chancellor and was assigned to succeed his late friend, Fr. John Skvir, who had reposed unexpectedly, as pastor of Sts. Peter and Paul Church in Jersey City, NJ.

At this time, perestroika and glasnost were rapidly changing the life of the Church in the Soviet Union, and it became possible for the Orthodox Church in America to realize its long-held vision to establish a representation church in Moscow, alongside the representation of several other autocephalous churches. The idea of establishing a representation church of the North American Diocese in Russia was first conceived in the early twentieth century. With his vast experience in church administration, understanding of the Russian Church through his contacts with its leaders and travels there, along with his pastoral and language skills, Fr. Daniel possessed the requisite qualities to become the representative, a kind of ecclesiastical ambassador, for the OCA in Moscow. Therefore, effective January 1, 1992, Fr. Daniel and Matushka Dunia were assigned to serve in Moscow. Initially, Fr. Daniel conducted services at a chapel within the Danilov Monastery, gathering a flock of Americans and other English-speaking Orthodox stationed in Moscow, along with locals who also joined the community. As this community grew, it became apparent that the American representation could indeed become a permanent fixture in Moscow. Patriarch Aleksy II of Moscow and All Rus offered the OCA a choice of several churches in central Moscow to house its representation. The Church of St. Catherine in the Fields on Bolshaya Ordynka Street was chosen. On December 7, 1994, the feast of St. Catherine, Patriarch Aleksy and OCA Primate Metropolitan Theodosius concelebrated a festive prayer service at the church to officially inaugurate its functioning as the OCA Representation Church. Father Daniel worked tirelessly to restore the church buildings that had been used for secular purposes during Soviet times. He built up the parish community and made the OCA a visible presence in Moscow in both ecclesiastical and secular circles. Through the labors of Fr. Daniel, the altar of St. Catherine’s Church was readied for its solemn consecration by Patriarch Aleksy and Metropolitan Theodosius on June 11, 1999. Many hierarchs and clergy concelebrated and numerous pilgrims from the United States attended the festive occasion.

After nearly a decade of ministry in Moscow, Fr. Daniel and Matushka Dunia returned to the United States in 1999 and settled permanently in their home in coastal Maryland. He started a new mission community, Christ the Savior, which has now progressed to parish status in Berlin, MD. After the assignment of Fr. John Parsells as parish rector in 2006, Fr. Daniel was able, at the age of 80, to relinquish his pastoral responsibilities, although he and Matushka remained an active presence in the parish until the end of his life.  In his later years, he was also active in the management of Sts. Cosmas and Damian Adult Home in Staten Island, NY and spoke at various events reflecting on the historical events he had witnessed in church life.  Father Daniel and Matushka Dunia were also able to visit Russia again several times in the two decades since they left. They were always warmly welcomed back, especially at St. Catherine’s Church where they had labored so energetically. Most recently, Fr. Daniel participated in the celebrations marking the twenty-fifth anniversary of the inauguration of St. Catherine’s Church as the OCA Representation that took place in Moscow in December 2019, where he was acknowledged by Patriarch Kirill of Moscow.

Father Daniel was honored with many awards throughout his long ministry. Most notably, he was elevated in 1997 to the rank of protopresbyter, a rare honor for clergy who serve with great distinction. He was also awarded the St. Innocent Award (gold class) and the right to wear the mitre.

He is survived by Matushka Dunia, his beloved spouse of sixty-nine years; daughters, Larice Nescott and her husband Gregg, an attorney and prominent Orthodox layman who was a longtime member of the Metropolitan Council, and Matushka Annice, wife of Archpriest Joseph Oleynik, recently retired pastor of St. John the Baptist Church of Canonsburg, PA; and several grandchildren and their families.

His passing truly marks the end of an era. From Fr. Daniel’s connection through his father to the Church in North America in the early twentieth century to the multitude of major historical events he personally experienced and significant church figures he knew through most of the twentieth century and into the twenty-first. He will be missed by many who were touched by his multifaceted priestly ministry in both America and Russia.

The schedule of services for F. Daniel’s funeral is as follows:

May Protopresbyter Daniel’s memory be eternal!