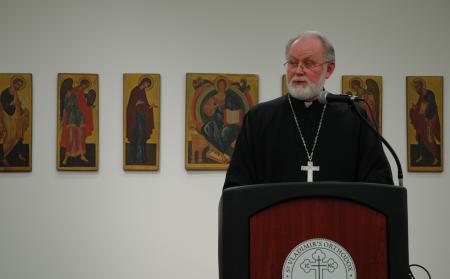 With faith in Christ and hope in the resurrection, we share news of the repose of Protopresbyter Leonid Kishkovsky, longtime Director of the Orthodox Church in America (OCA)'s Office of External Affairs and Interchurch Relations. Father Leonid fell asleep in the Lord on the evening of August 3, 2021 in Sea Cliff, NY.

"Protopresbyter Leonid Kishkovsky will be remembered as one of the building blocks of what would become the OCA. His global contacts and influence in both Orthodox and ecumenical spheres had no rivals," said Archpriest Chad Hatfield, president of St. Vladimir's Seminary. "His legacy will be studied and interpreted for many years to come. May God grant him Paradise."

In addition to his work for the OCA, Fr. Leonid had vast experience serving the Church nationally and internationally through leadership in organizations such as SCOBA, IOCC, and the World Council of Churches. He was also the long-serving rector of Our Lady of Kazan Church, Sea Cliff, NY.

"Father Leonid was one of my most cherished mentors, especially in church diplomacy, where he embodied both zeal and sobriety, and also realism, respect for the other, and love for the Church," said St. Vladimir's Professor Dr. Peter Bouteneff. "His unflagging commitment and hope (often in the face of deep disappointment), his knowledge, and his connectedness to the movers and shakers of the church and the political world made him into one of the giants of our time—all the while, grounded in his beloved little parish in Sea Cliff. In making the Orthodox Church known, understood, and respected throughout the world, his impact was incalculable."

All services for Fr. Leonid’s funeral will take place at Our Lady of Kazan Church, 2 Willow Shore Ave, Sea Cliff, NY. The schedule is as follows:

All clergy who wish to concelebrate the funeral or the Divine Liturgy should contact the chancellor of the Orthodox Church in America, Archpriest Alexander Rentel, at chancellor@oca.org or (516) 922-0550 x130.

May the memory of Protopresbyter Leonid be eternal!