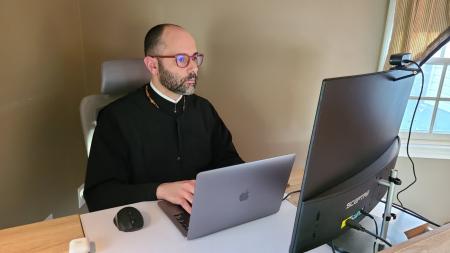 Seminary graduate and current Doctor of Ministry (D.Min.) student Priest Alessandro Margheritino has been appointed secretary of the Orthodox Church in America (OCA). The Holy Synod confirmed the appointment Tuesday, May 18, 2021.

The Rev. Alessandro has been serving as executive assistant at the OCA Chancery and rector of  St. Innocent Church in Olmstead Falls, OH, under the omophorion of fellow St. Vladimir’s Alumnus His Eminence, Archbishop Paul (’94) and the OCA’s Diocese of the Midwest.

Father Alessandro was born and raised in Palermo, Italy. Raised in a Roman Catholic family, Fr. Alessandro was chrismated in the Orthodox Church at the age of 17. In Italy, he attended a linguistic lyceum where he studied Italian, English, and French literature for five years. He later studied at the University of Palermo where he graduated with a bachelor’s degree in international relations and political science. Prior to enrolling at St. Vladimir’s Seminary in Yonkers, NY in 2011, he and his wife, Matushka Anna—who is currently the Seminary’s graphic designer—were members of St. Gregory of Nyssa Orthodox Church in Columbus, OH. Father Alessandro was an active student during his time at St. Vladimir’s, serving as student council president and graduating with a commendation for service to the community when he completed his Master of Divinity (M.Div.) degree in 2014. He was ordained to the priesthood by His Beatitude on the Feast of Ascension on May 29, 2014 at the Seminary’s Three Hierarchs Chapel. He was assigned to St. Innocent Church the same year. In recent years, Fr. Alessandro has also served as president of the Greater Cleveland Council of Orthodox Clergy and spiritual advisor for ZOE for Life!