If St. John Chrysostom had watched the Super Bowl! 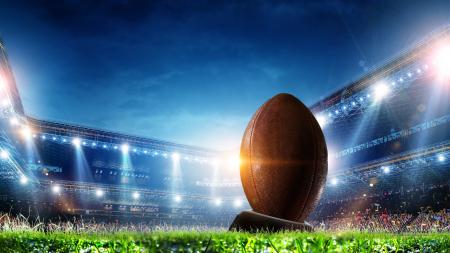 This pales beside the Divine Liturgy, the Eucharist, and the real ‘Super Sunday’, Pascha!

The Super Bowl and the secular Super Sunday is now over. One more game for the history books (though I rather doubt that serious history books record Super Bowl game results). The colossal social phenomenon — the Super Bowl — was viewed by hundreds of millions of people worldwide this past Sunday.  Not to be disparaging or dismissive, it might yet be wise to approach this phenomenon from the perspective of our shared Orthodox Christian faith.  No sense carrying on about the hype and the madness. When all is said and done, it is what it is.

But I could not avoid speculating on how someone like Saint John Chrysostom, who fell asleep in the Lord in AD 407, would have approached the Super Bowl phenomenon in his own unique and pastoral manner.  Of course, there is a huge chronological gap between Saint John’s time and our own, but we also know that there ‘is nothing new under the sun,” and we can discover some very close parallels just under the surface when comparing different eras and their cultures.  Saint John very well knew and understood the lure of the “games” and other forms of public entertainment in his own time, as he lived in large, cosmopolitan and urban settings such as Constantinople and Antioch. Such urban settings invariably had a hippodrome — the equivalent of our stadiums — at the center of a teeming social milieu that was also open to public entertainment.

What is quite interesting in Saint John’s pastoral approach is that even if there is an implicit criticism of these public forms of entertainment (as he was very critical of the “theatre” as it existed in his day), that was never his main concern.  Saint John would employ what we would call today “sports” and other diverse forms of entertainment in order to exhort his flock to be vigilant and committed in its adherence to and practice of the Gospel.  Being a “fan” of a sport is far from being a “member” of the Church.  As a pastor, Saint John would challenge his flock to ensure that the great gap in that distinction is not somehow closed by lack of vigilance.

The great saint was fully aware of a kind of nominal membership in the Church, and he was quick to point out how erosive of genuine faith that lack of commitment could be for the entire flock under his pastoral care.  Saint John was basically asking: Are Christians as committed to the Gospel and the life of the Church as they are to the participants and performers in the “entertainment industry” of the fourth and fifth centuries?  Primarily, this would include athletes and actors. Do Christians show the same level of passion for the Gospel as do the fans of the games and theatre? Here is one example from among many of how Saint John used his rhetorical skills in challenging Christians on this front:

“We run eagerly to dances and amusements.  We listen with pleasure to the foolishness of singers. We enjoy the foul words of actors for hours without getting bored.  And yet when God speaks we yawn, we scratch ourselves and feel dizzy.  Most peoples would run rabidly to the horse track, although there is no roof there to protect the audience from rain, even when it rains heavily or when the wind is lifting everything.  They don’t mind bad weather or the cold or the distance. Nothing keeps them in their homes. When they are about to go to church, however, then the soft rain becomes an obstacle to them.  And if you ask them who Amos or Obadiah is, or how many prophets or apostles there are, they can’t even open their mouths.  Yet they can tell you every detail about the horses, the singers and the actors.  What kind of state is this?”

Yet, this rhetorical deflation of the theatre and games serves as a backdrop that only intensifies the strength of his descriptions of the manifold riches of the Church, especially the Eucharist. From the same homily, here is Saint John’s impassioned and rhetorically brilliant description of the glory of the Church:

“The Church is the foundation of virtue and the school of spiritual life.  Just cross its threshold at any time, and immediately you forget daily cares. Pass inside, and a spiritual ray will surround your soul. This stillness causes awe and teaches the Christian life.  It raises up your train of thought and doesn’t allow you to remember present things.  It transports you from earth to Heaven.  And if the gain is so great when a worship service is not even taking place, just think, when the Liturgy is performed — and the prophets teach, the Apostles preach the Gospel, Christ is among believers, God the Father accepts the performed sacrifice, and the Holy Spirit grants His own rejoicing — what great benefit floods those who have attended church as they leave the church.

“The joy of anyone who rejoices is preserved in the Church.  The gladness of the embittered, the rejoicing of the saddened, the refreshment of the tortured, the comfort of the tired, all are found in the Church.  Because Christ says, ‘Come to me, all who are tired and heavy-laden, and I will give you rest’ [Matthew 11:28].  What is more longed for than [to hear] this Voice?  What sweeter than this invitation?  The Lord is calling you to a Banquet when He invites you to church. He urges you to be comforted from toils and He transports you to a place of comfort from pain, because He lightens you from the burden of sins. He heals distress with spiritual enjoyment, and sadness with joy.”

Saint John was not called Chrysostom — the “Golden-mouthed” — for nothing!  He does not admonish his flock in this homily to give up on the games and other forms of entertainment; but he surely makes it clear that there is no comparison between the two.  And that, therefore, our desire and commitment cannot be so misplaced to somehow put the two on the same level of attraction.  The perfectly legitimate desire to “fit in” with one’s neighbors and participate in socially popular events must be balanced by an awareness of not being fully of the world once one is baptized into the Church.

Bearing all of that in mind, if I were to write in the spirit of Saint John and try to apply his approach to parish life in the contemporary world, I would make the following pastoral “suggestions” based on the recent Super Bowl — or for that matter, any existing commitment we might have to the world of professional sports/entertainment.

If you spent time watching all of the pre-game hype and analysis, all meant to prepare you for the game, but if you have never given much thought to arriving before the Liturgy for the reading of the Hours; then I would suggest arriving in church before the actual Liturgy begins in time for the pre-Eucharist chanting of those very Hours — a mere 20 minutes.  This way you are able to settle in and calm down a bit in preparation for the Liturgy that will shortly unfold in all of its majesty.

If you have been engaged in some of the (endless) post-game analysis since yesterday; or watched “highlights” of the game, or recall some of the more significant and game-changing plays of the game, but if you struggle by mid-week to remember what the Gospel was at last Sunday’s Liturgy, then I would suggest engaging in some post-Liturgy analysis of the Gospel that you heard on any given Sunday with  family and/or friends (or within your own mind and heart). There are also the many existing commentaries from the Church Fathers or contemporary Orthodox thinkers.  Such “analysis” can eventually become genuine meditation of even contemplation.