When You Fast: A Reflection Before Great Lent 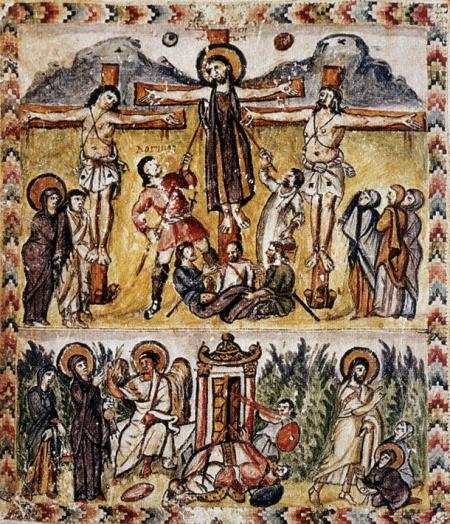 What appears to happen in the Passion of Christ and what actually happens are not at all the same. What appears to happen is not that extraordinary. The Romans crucified a Jewish man in order to keep public order. During their long rule over Judea, the Romans had killed many Jews, making the death of Jesus one among these many. But, only in appearance. The reality was very different. The Paschal homily attributed to St. John Chrysostom emphasizes this difference between appearance and reality. Chrysostom describes Christ’s encounter with Hades as follows:

Hades…was embittered when it encountered thee in the lower regions… It took a body, and met God face to face. It took earth, and encountered Heaven. It took that which was seen, and fell upon the unseen. Fooled by what appeared to be just another corpse, Hades was overthrown by an encounter with the Almighty God, as the Passion and Resurrection of Christ shook the foundations of the universe in the final acts of a cosmic drama. As we enter the Lenten season, we are reminded that we have a role in this universal, cosmic drama. Let’s reflect on the proper nature of our role by using the language of appearance and reality. For, it is easy to confuse our role, or to play the wrong role by focusing on our appearance rather than our reality. When Jesus chastises his opponents, he often calls them hypocrites for practicing their piety in public, and for drawing attention to themselves as they pray.

The word hypocrite, of course, is the Greek word for “actor.” They are trying to “act” pious and “act” charitable. Their focus is on their appearance in public. Jesus urges them instead “to go into your room and shut the door and pray to your Father who is in secret; and your Father who sees in secret will reward you” (Matt 6:6). Now, these things are not included in the Gospels so that we can ridicule the Pharisees whom Jesus criticizes. Indeed, they are written, not because we are unlike the Pharisees, but because we have the unfortunate potential to be just like them. The very things that are designed to make us more humble, the very acts of repentance and self-denial that are supposed to make us more open to God and more loving to one another can be used to make us more self-satisfied and more self-centered. But this is to focus on the appearance of holiness, and not its reality.

A wonderful little book called the Way of the Ascetics provides an important image for reflecting on real holiness. For, we may be inclined to think that, if we want to be humble, we must try to appear humble. We might, for instance, wear especially humble clothes or constantly adopt humble postures. But, this, too, can be a way of drawing attention to ourselves. The Way of the Ascetics has a lovely passage about real humility, however, emphasizing that the truly humble person doesn’t stand out as being more humble than others, and, indeed, doesn’t stand out at all. You may not even notice him because the goal of humility is precisely not to stand out. Real holiness has a way of making a person appear relatively normal, just like everyone else. As with the Passion of Christ, of course, this appearance of being usual and everyday is only on the surface.

A very helpful step in focusing on the inner drama of holiness is to avoid comparing ourselves with others, and the Church reminds us of this fact in various ways. On the 5th Sunday of Lent, for instance, we commemorate St. Mary of Egypt. She lived alone in the desert until she met St. Zosimas, who tells her story.

We wouldn’t know anything about St. Mary, however, if St. Zosimas had not encountered her in the desert. And St. Zosimas would not have been in the desert if his monastery had not observed the Lenten fast in a particular way. To keep the monks of his monastery from competing with one another, the monks retreated individually into the desert, in order to observe the fast separately. Their drama was internal and their only audience was God. This is a helpful model to imitate. A certain silence should accompany our fasting. While it will be helpful to encourage one another and support one another over the next forty days, it is also easy for this need for support to become something else. It’s easy to find ways to drop hints of our fasting regimen into casual conversations. We might even rationalize a good reason for doing so. But this is to risk making the fast into one more opportunity to put ourselves in the limelight and at center stage, and to undermine the real work of fasting, prayer and repentance that lie within the inner heart of Lent.

His scroll reads: “I have seen all the snares of the devil spread out on… [earth and I said with a sigh: ‘Who can pass these by?’ and I heard a voice saying to me: ‘Humble-mindedness.'”] Alphabetical Sayings (PPS trans.), Saying 7

The great ascetics of the early Church always navigated between the appearance and the reality of holiness. We are regularly told in the stories of the Desert Fathers that the monks of the Egyptian desert would hide their ascetical practices from visitors. They don’t make their guests fast with them, but prefer to show hospitality to whomever comes to see them. They feed them well and make them comfortable. The visitors, of course, are always surprised and suppose that these renowned monks are not really all that strenuous in their spiritual exercises. We are always told in the stories, however, what really happens, and how the ascetic only allows himself to appear unimpressive, because his greater concern is the care and comfort of his guests. Here we see the opposite of the hypocrites whom Christ admonishes. The appearance is allowed to be unspectacular, while the reality of generosity and holiness is profound. Let us, then, observe the fast in reality and not only in appearance, following these models of piety and especially the model of our Lord, whose strength was shown in weakness and whose apparent defeat in death led in reality to the victory of the Resurrection. “For, if we have been united with him in a death like his, we will certainly be united with him in a resurrection like his” (Rom 6:5).