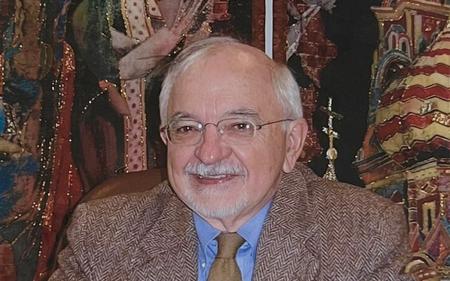 With faith in Christ and hope in the resurrection, we share the news of the repose of Jonathan Russin, longtime friend and supporter of St Vladimir’s Seminary, in Washington on December 31, 2022, following complications from a stroke.

Jonathan was born October 30, 1937, in Wilkes-Barre, PA, and grew up in nearby Kingston. Graduating from Kingston High School he was awarded a scholarship to Yale, where he earned a BA in politics and economics in 1959 and a Juris Doctor degree from Yale Law School in 1962. In 1962, Jonathan married Antoinette (Toni) Stackpole. Raising four sons, he and Toni lived abroad for much of their lives—in Turkey, Dominican Republic, Spain, and Russia. Jonathan enjoyed working overseas and experiencing new cultures, especially with his family. An epicure, adventurer, and devoted family man, Jonathan was at home anywhere in the world. A habitual reader and lifelong devotee of art, theater, and music, he passed his many passions to his family, who often gathered around as he poured vodka and spread caviar in honor of being together.

Raised in the Russian Orthodox Church, Jonathan was especially interested in Russia. He first traveled there as an undergraduate, singing with the Yale Russian Chorus on its first tour in 1958. He then served as a host at USIA’s landmark exhibition, the venue for Vice President Nixon’s “kitchen debate” with Premier Khrushchev. The following summer, as an American Express guide, he led Russian tourists on tours around the US. Years later, with the fall of the Soviet Union, he opened the Moscow office and then moved to Russia with Toni in 1996, living and working there for 17 years. With the rise of authoritarianism under Putin, in 2013 Jonathan returned to Washington, where he continued to advise clients and counsel good causes for another decade. Jonathan’s public service extended to various non-profit organizations. He became a lay leader at St. Nicholas Orthodox Cathedral in Washington and later the principal lawyer of its patron body, the Orthodox Church in America (OCA). He was instrumental in persuading the Russian primate, Patriarch Alexy II, to visit the US and then to send Russian iconographers to decorate the Cathedral’s interior. Alexy would later induct Jonathan into the Order of St. Vladimir. Jonathan served on the board of the renowned cellist Mstislav Rostropovich’s Rostropovich-Vishnevskaya Foundation, and on the board of International Orthodox Christian Charities.

Jonathan also served as a member of the Board of Trustees and Chair of the Legal Committee at St Vladimir’s Seminary.

A funeral service will be held on Thursday, January 5, 2023 at 11:00 a.m. at St. Nicholas Orthodox Cathedral, 3500 Massachusetts Ave. NW, Washington, DC 20007. Arrangements by DeVol funeral home, devolfuneralhome.com. The burial will be held on Friday, January 6, 2023 at 11 a.m. at Fern Knoll Burial Park, in Dallas, Pennsylvania. Arrangements by Edwards & Russin Funeral Home, https://russincares.com/. In lieu of flowers, the family kindly requests any donations be made to the Rostropovich Vishnevskaya Foundation (RVF): For the Heath of Children https://rostropovich.org/en/who-we-are/our-founders/.

Adapted from obituary at russincares.com.