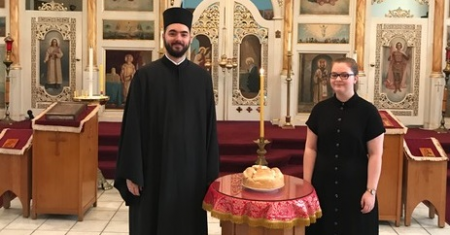 The bequests of the parishioners stipulated that the funds be used for seminary education. It was up to Holy Resurrection’s Executive Board to decide where the funds should be distributed, and they selected St. Vladimir’s Seminary, adding to the amount of the bequests with a contribution from the parish itself.

Holy Resurrection, a parish in the Serbian Orthodox Diocese of Eastern America, has been pastored by Class of ’18 alumnus Fr. Stefan Djoric since June 2019. Originally from Čačak, Serbia, Fr. Stefan earned his Bachelor of Arts in Theology from the University of Belgrade before “crossing the pond” to earn two theological degrees from St. Vladimir’s: the Master of Arts and the Master of Theology. He will shortly begin a remote Ph.D. program under the auspices of Münster University in Germany.

“As I’m starting my doctoral program, I know that because of the Seminary I’m more than prepared to begin working on a doctoral thesis,” he says.

Father Stefan explains why his parish selected St. Vladimir’s as the beneficiary of the two planned gifts. “While I was a student at St. Vladimir’s, two people from the Holy Resurrection board came for a visit. The hospitality extended towards these leaders left a very positive impression on them. Father Chad offered them a tour and gave generously of his time, introducing them to the campus and all aspects of its ministry to Serbian students. They liked what they saw!

“I am glad that the check from Holy Resurrection arrived safely at St. Vladimir’s,” continues Fr. Stefan. “With all the help I received from the Seminary, the least I could do was encourage our parish’s board to direct the scholarship bequest money to St. Vladimir’s. This is my time to repay SVOTS for what I received. Father Chad fought for me like a lion so that I could come to seminary; I had zero money but Fr. Chad said, ‘Come — everything will be covered.’ I think he also joked about needing a shooting guard for the annual basketball matchup with St. Tikhon’s!”

The formative years of seminary are often life-changing for students. Father Stefan explains why he values his St. Vladimir’s education now that he and Popadija Marina are active in ministry. “Becoming acquainted with the American Orthodox culture through St. Vladimir’s gave me a tremendous foundation so that I could better understand the mentality of American Orthodox people.

“In our parish,” he continues, “we have third and fourth generation Serbian members who are more American than Serbian in some ways. Studying at St. Vladimir’s prepared me to be a good shepherd to them. For instance, the Serbian style of preaching is very different; it’s very serious and there is no room for jokes, but in the United States it’s preferable to employ humor in a homily from time to time.”

Father says that the community life at St. Vladimir’s was also foundational for him. “Living in an Orthodox community, you are blessed because you discover that many people are willing to assist you in any way. This leaves a lasting impression on you and gives you a model of humble service.”

“You also learn,” adds Fr. Stefan, “that every community comes with all kinds of people! Some annoy you, some are easy for you to get along with; you have to accept this. Since you know you will see these people every day, you learn to work on yourself to heal the sore spots in your own personality! In this way, just by living alongside people day in and day out, you begin to value humility and patience, and how to be less self-centered.”