Attendance is free, but you must register beforehand if you plan on joining whether in person or online. In-person attendance will be limited due to pandemic-related restrictions. *NOTE: Met. Hilarion's Keynote Lecture on November 11 is online-only. All talks scheduled November 12 may be attended online or in person.

This unique event brings together noted scholars from theological schools such as St. Vladimir’s, Hellenic College-Holy Cross, Yale Divinity School, Asbury Theological Seminary, and others to present their latest research (learn more below). The event will kick off with a keynote lecture by His Eminence, Metropolitan Hilarion. (Three volumes of his six-volume Jesus Christ series are available for purchase through SVS Press, with the fourth volume expected to release later this year.) 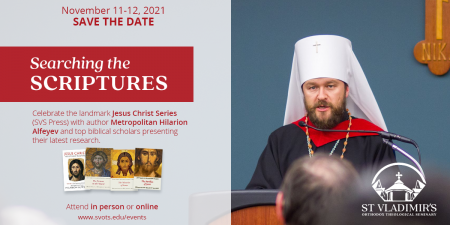 8 a.m. to 8 p.m. EST – Academic Conference
Lectures, Panel Discussions, Q&A, and Concluding Reception (Attend In Person or Online)
*Meals will be served throughout the day.

**A detailed schedule will be made available to registrants.

SEARCHING THE SCRIPTURES IS MADE POSSIBLE
BY OUR GENEROUS SPONSORS:

ABOUT THE JESUS CHRIST SERIES

This six-volume series of books on the life and message of Jesus, in ongoing publication by St. Vladimir’s Seminary (SVS) Press, has been lauded by well-known scholars including Pope Benedict XVI, Metropolitan Kallistos Ware, Craig S. Keener, and many others. It is not so much for those Christians who are rooted in holy tradition as it is for non-believers, those who doubt and who are hesitant. In the first instance, it may give some answers to those who believe that Jesus never even existed. Secondly, it is for those who believe that Jesus existed but do not believe that he is God. Thirdly, it is for those who perhaps consider themselves Christians but relate to the Gospel narratives skeptically or view the Gospels through the prism of the criticism to which it was subjected in the works of Western specialists in the New Testament in the nineteenth and twentieth centuries. Ultimately, it attempts to answer the main question of what Jesus has brought to people and why he is necessary for people today.

Metropolitan Hilarion Alfeyev is the chairman of the Department of External Relations of the Moscow Patriarchate. He has authored numerous works on theology and church history, and is an internationally recognized composer of liturgical music. Several of his works are available through SVS Press, including his landmark Orthodox Christianity series and Christ the Conqueror of Hell.

ABOUT THE ACADEMIC CONFERENCE SCHOLARS

John Barnet, Ph.D., is associate professor of New Testament at St. Vladimir’s Orthodox Theological Seminary in Yonkers, NY, where he also teaches courses in biblical Greek. He completed his doctoral studies at Duke University under the direction of Professor Dan O. Via. Barnet’s published writings include "Paul's Reception of the Gift from Philippi" (St. Vladimir's Theological Quarterly, 2006); Not the Righteous but Sinners: M. M. Bakhtin's Theory of Aesthetics and the Problem of Reader-Character Interaction in Matthew's Gospel (2003); and "Stewardship and the New Testament" (Good and Faithful Servant: Stewardship in the Orthodox Tradition, 2003).

Bruce Beck, Th.D., is assistant professor of New Testament at Holy Cross Greek Orthodox School of Theology in Brookline, MA and director of the Religious Studies program at Hellenic College. Beck received both his M.Div. and Th.D. at Harvard Divinity School, where his area of specialization was New Testament and early Christianity, and the history of the interpretation of Scripture. His teaching in the area of New Testament bridges the academic study of the Bible with the practical arts of interpreting it in useful ways for the life of the Church today. His written work has highlighted the ways in which liturgical hymnology and patristic homilies can be potent sources for the history of interpretation of Scripture.

Carl R. Holladay, Ph.D., is professor emeritus of New Testament at Candler School of Theology (Emory University) in Atlanta, GA. He taught at Candler and in Emory's Graduate Division of Religion from 1980 to 2019, and is a popular lecturer at colleges and universities around the world. Holladay’s research joins classical academic scholarship and professional application, focusing on Luke-Acts, Hellenistic Judaism (Judaism in the Greco-Roman world), and Christology. His scholarly contributions have focused on the ways in which the culture of the Hellenistic world shaped Jewish traditions of the Second Temple period, and through them the development of early Christianity.

Edith Mary Humphrey, Ph.D., is the William F. Orr Professor Emerita of New Testament at Pittsburgh Theological Seminary, and a member of St. Nicholas Parish, McKees Rocks, Pittsburgh. She earned her doctorate from McGill University, Montréal, for which she received the Governor General’s Gold Medal. Before taking her position in Pittsburgh, she lectured at several Canadian universities, serving as dean for Augustine College, Ottawa, while also serving as music director and organist for St. George Anglican Church, Ottawa. Since her retirement in January 2021, she has continued to teach in various milieux, write, and speak frequently in Christian and academic contexts. She is the author of numerous articles and nine books on topics as diverse as apocalypses, worship, Christian spirituality, human sexuality, and C. S. Lewis.

Craig S. Keener, Ph.D., is the F.M. and Ada Thompson Professor of Biblical Studies at Asbury Theological Seminary in Wilmore, KY. He has authored 28 books, six of which have won book awards in Christianity Today, of which altogether more than one million copies are in circulation. The NIV Cultural Backgrounds Study Bible, for which Keener authored most of the New Testament notes (and which he co-edited), won Bible of the Year in the 2017 Christian Book Awards, and also won Book of the Year in the Religion: Christianity category of the International Book Awards. He has also written for various journals, including the Journal for the Study of the New Testament and Christianity Today.

Rev. George Parsenios, Ph.D., is dean and professor of New Testament at Holy Cross Greek Orthodox School of Theology, Brookline, MA. Before he became dean at Holy Cross, Fr. George taught for many years at Princeton Theological Seminary, St. Vladimir’s Orthodox Theological Seminary, and the St. Athanasius Theological College in the University of Melbourne (Australia). His teaching and research explore the interaction of early Christianity with classical literature as well as the interpretation of the New Testament in the early church. He is the author of three books and several articles on New Testament themes, with a specialization in the Gospel and Letters of John.

Gregory E. Sterling, Ph.D., is Rev. Henry L. Slack Dean of Yale Divinity School and its Lillian Claus Professor of New Testament. He assumed the deanship in 2012 after more than two decades at the University of Notre Dame. Concentrating his scholarship in Hellenistic Judaism and early Christianity, Sterling is the author or editor/co-editor of eight books and more than 100 scholarly articles and essays. He has held numerous leadership positions in the Society of Biblical Literature, the Studiorum Novi Societas, and the Catholic Biblical Association.

James Buchanan Wallace, Ph.D., is chair and professor of the Department of Religion and Philosophy at Christian Brothers University in Memphis, TN. He has also taught at Candler School of Theology (Emory University) and the St. Nicholas Orthodox Academy in Atlanta, GA. Wallace’s research interests include patristic interpretations of Scripture and the Greco-Roman and Jewish religious contexts of early Christianity. He is also fascinated by heavenly ascent traditions of the ancient world. Wallace is a subdeacon in the Orthodox Church in America and occasionally serves as a guest speaker on Eastern Orthodox Christian theology and spirituality.

Theologian The Rev. Dr. Khaled Anatolios will deliver the 39th Annual Father Alexander Schmemann Memorial Lecture at St. Vladimir’s Seminary on January 30, 2022, on the Feast of the Three Hierarchs.