(WEBINAR) Expanding the Tent: Restoring Orthodoxy to Africans in the Diaspora

The late Metropolitan Philip (+2014) of the Antiochian Archdiocese once famously said that Orthodox Christianity “remains the best kept secret in America because of our laziness.” In the years since he uttered those words, have we made any progress in spreading the Gospel in North America, including to minority communities such as African-Americans? What can we do differently to evangelize more effectively? 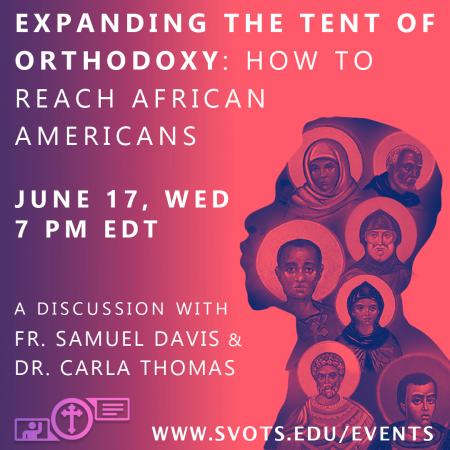 Join us Wednesday, June 17, for the free webinar, “Expanding the Tent: Restoring Orthodoxy to Africans in the Diaspora.” The online event will be led by Priest Samuel Davis (Orthodox Church in America) and St. Vladimir’s Seminary Trustee Dr. Carla Thomas. The discussion begins at 7 p.m. EDT.

Father Samuel Davis is the priest of St. Simon of Cyrene Orthodox Mission (Orthodox Church in America) in New Brunswick, NJ and an alumnus of St. Tikhon’s Orthodox Theological Seminary, South Canaan, PA. He is the first African-American to be ordained to the priesthood in the New York and New Jersey Diocese of the Orthodox Church in America. Father Samuel was born to Panamanian immigrants on March 25, 1980 in Brooklyn, NY. One evening, after hearing a sermon, entitled “Prerequisites of His Presence” by Archbishop Veron Ashe, Samuel made a commitment to the Lord to serve the Holy Church in whatever capacity God would lead him. In September 2010 Fr. Samuel was baptized into the Orthodox Faith. After receiving the blessing of his then hierarch, Fr. Samuel prayerfully began St. Simon of Cyrene Orthodox Mission as a homeless outreach to meet the needs of the city of New Brunswick’s “untouchables.” The mission was later received into the Orthodox Church in America. His Eminence, Archbishop Michael ordained Samuel to the holy diaconate and then to the priesthood in 2018.

Carla Thomas, M.D. practices family and emergency medicine in Anniston, AL. She is a member of St. Luke’s Orthodox Church in Anniston. She sits on the boards of St. Vladimir’s Orthodox Theological Seminary and Orthodox Christian Prison Ministry. She founded the Anniston Chapter of the Brotherhood of St. Moses the Black and runs the Abba Moses Free Clinic. The Abba Moses Clinic serves the portion of the population that is most likely uninsured, those from 19 to 64 years of age. Dr. Carla, who was baptized Panteleimona after the Great Unmercenary Healer Panteliemon, charges no fees for her work at that clinic.

The Institute of Sacred Arts at St Vladimir’s Orthodox Theological Seminary (SVOTS) and Great Music Under a Byzantine Dome will host a concert performance by the world-renowned ensemble, Cappella...