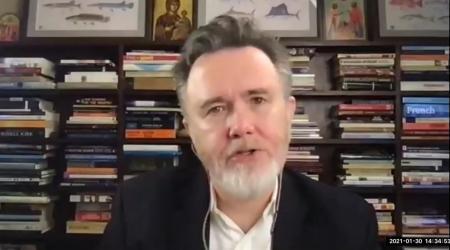 The Seminary community gathered in the morning for Divine Liturgy for the Synaxis of the Ecumenical Teachers and Hierarchs: Basil the Great, Gregory the Theologian, and John Chrysostom, patrons of the Seminary chapel. Seminary Academic Dean Dr Ionuț-Alexandru Tudorie delivered the homily, his first at Three Hierarchs Chapel.

Dreher’s lecture was titled “Living in Truth: How the Communist-Era Suffering Church can Prepare Us to be Dissidents.” In it, Dreher defined the challenges and explored the gifts the suffering church has for a complacent West.

"The world today either wants us to abandon Christianity, or substitute a very modern Christianity...which amounts to the same thing," said Dreher. "Parishes that live the true faith, though, will be a beacon in the night to those who long for Jesus Christ.

“These are parishes that don't give themselves over to cultural fads or to the politics of the left or the right, but seek nothing but unity with Christ—no matter what it costs."

Dreher’s talk coincided with the publication of A Voice for Our Time: Radio Liberty Talks, Vol. 1, featuring an English translation of Schmemann’s broadcasts into the Soviet Union that began in 1953. This first volume of the two-part series, being published by St. Vladimir’s Seminary (SVS) Press, features a foreword by Dreher.

Saturday’s Schmemann Lecture and the forthcoming book are part of “The Year of Schmemann” celebrations at St. Vladimir’s. In 2021, the Seminary is honoring 100 years since the birth of Fr. Alexander Schmemann (1921-1983), its beloved former dean and renowned theologian.