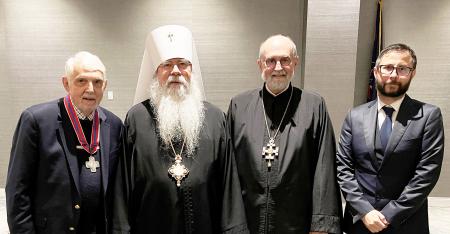 On Sunday, November 13, 2022, at the 10th Anniversary celebration honoring the election of Metropolitan Tikhon as the Primate of the Orthodox Church in America (OCA), St Vladimir’s Seminary senior faculty member, Dr Al Rossi, was honored for his lifetime of service with the St Innocent Medal (Silver Class). His Beatitude presented Dr Rossi with the award, thanking him for his steadfast service to the Church over many years. During his comments, Metropolitan Tikhon stressed Dr Rossi’s written and lived example in becoming a "healing presence," and referred to a quote from Saint Athanasius, “The Lord did not come to make a display. He came to heal and to teach suffering people.”

Dr. Rossi has been a member of Office of Review of Sexual Misconduct Allegations for a dozen years, dealing with dark and difficult issues. He is also a Board member of Thriving in Ministry, an initiative launched by the Lilly Foundation, which received a half million dollar grant to establish and facilitate small groups for bishops, priests and priests' wives. He has given keynote addresses at many conferences and led many parish retreats.

Generations of seminarians have benefitted from Dr Rossi’s presence as the resident Clinical Psychologist at St Vladimir's Seminary. He has served, and continues as a member, on the Faculty Council for 20 years. He has written two books, Becoming a Healing Presence and All Is Well. After teaching at Pace University for 24 years, he retired as Associate Professor of Psychology. Dr. Rossi also has a brief, bi–weekly podcast on Ancient Faith Radio titled Becoming a Healing Presence.