With faith in Christ and hope in the resurrection, we share news of the falling asleep of His Beatitude, Metropolitan Herman (Swaiko), retired primate of the Orthodox Church in America (OCA). His Beatitude reposed on September 6, 2022, at the age of 90.

His Beatitude was born Joseph Swaiko in Briarford, PA, on February 1, 1932, and was baptized at St. Michael’s Russian Orthodox Church in Curtisville, PA. As a youth and young adult, he sang in the parish choir, taught Sunday school, and eventually served as a member of the parish and diocesan councils.  After completing his elementary and secondary education with honors in the West Deer Township schools, he enrolled at Robert Morris School of Business (later, Robert Morris College and now, Robert Morris University) in Pittsburgh, where he received a certificate in secretarial science.  Subsequently, he served in the Adjutant General Corps of the US Army while stationed in Labrador.

After being discharged from the military in 1959, at the urging of his parish priest Fr. Gabriel Davidiuk, Joseph Swaiko enrolled at St. Tikhon’s Seminary, South Canaan, PA, from which he graduated in 1963. While still a seminarian, he was appointed personal secretary to His Grace, Bishop Kiprian (Borisevich), who became rector of the seminary in 1961. After graduation, Fr. Joseph also assumed the duties of seminary registrar.

Following his ordination to the Holy Diaconate on March 21, 1964, and to the Holy Priesthood on April 7, 1964, Fr. Joseph served as rector of St. John the Baptist Church, Dundaff, PA, and Ss. Peter and Paul Church, Uniondale, PA, while continuing administrative work and teaching Church Slavonic at the Seminary. He was appointed to the Seminary’s Accreditation Committee and was instrumental in organizing the formation of its Board of Trustees, of which he was a charter member and secretary-treasurer. As Bishop Kiprian’s chief assistant, Fr. Joseph Swaiko facilitated construction of a large new building for the Seminary and renovation of the monastery church.  He also served as secretary of the Diocese of Philadelphia and Pennsylvania (today known as the Diocese of Eastern Pennsylvania). Fr. Joseph was also appointed general chairman of the Local Organizing Committee for the historic 14th All-American Sobor, convened at St. Tikhon’s Monastery in October 1970, which—on recognizing the Church’s autocephaly granted earlier that year—became the 1st All-American Council of the Orthodox Church in America.

In his ministry to youth, Fr. Joseph organized the first summer camp for children at the Seminary and Monastery in 1965. He inspired the formation of the Orthodox Christian Fellowship at Bloomsburg State College and became its chaplain. For many years he also served as spiritual advisor to the Anthracite District of the Federated Russian Orthodox Clubs (today known as the Fellowship of Orthodox Christians in America).

On December 4, 1970, he was tonsured a monk by Archbishop Kiprian and given the name Herman, in honor of St. Herman of Alaska who had been glorified among the saints just four months earlier. Less than a year later, on October 17, 1971, he was elevated to the rank of Igumen and named deputy abbot of St. Tikhon’s Monastery. 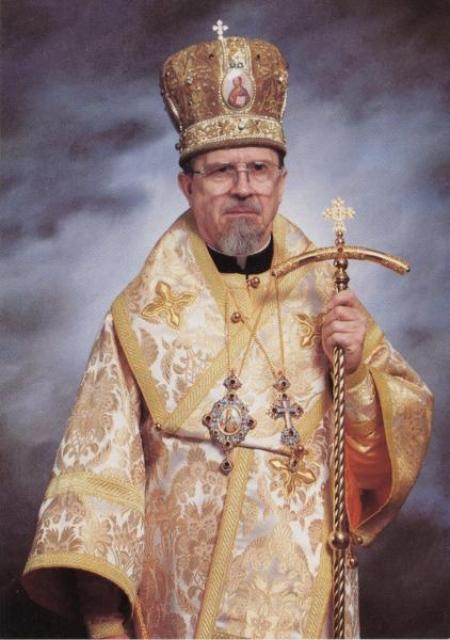 On October 19, 1972, Fr. Herman was elected to the Holy Episcopate and raised to the rank of Archimandrite three days later. He was consecrated to the episcopacy at Holy Resurrection Cathedral, Wilkes-Barre, PA, on February 10, 1973, with the title of bishop of Wilkes-Barre, serving as auxiliary of the Diocese of Philadelphia and Pennsylvania. The hierarchs participating in his consecration were Metropolitan Ireney (Bekish), Primate of the Orthodox Church in America; Archbishops Sylvester (Haruns) of Montreal and Canada; Kiprian of Philadelphia and Pennsylvania; Valerian (Trifa) of Detroit and the Romanian Episcopate; along with Bishops Theodosius (Lazor) of Pittsburgh and West Virginia and Dmitri (Royster) of Hartford and New England.

During his episcopal service, Bishop Herman continued to reside and teach at St. Tikhon’s Monastery and Seminary. In addition to his ministry within the Diocese of Philadelphia and Pennsylvania, he served as temporary administrator of the Diocese of the West in 1975 and temporary administrator of the Diocese of New England in 1978–81. Following the death of Archbishop Kiprian in December 1980, Bishop Herman was nominated to be ruling hierarch by a diocesan assembly on February 19, 1981, and elected bishop of Philadelphia and Eastern Pennsylvania by the Holy Synod of Bishops on March 17, 1981. His installation as diocesan hierarch took place at St. Stephen’s Cathedral in Philadelphia on April 29, 1981. During his tenure as ruling bishop of the diocese, several parishes were established and new church buildings were constructed and consecrated for both new and long-established parish communities.

Even after he was appointed rector in May 1981, Bishop Herman continued to teach at St. Tikhon’s Seminary. Among the subjects he taught were Church Slavonic, liturgics, homiletics and pastoral theology. As rector, he recruited new faculty members and sought to increase the student body. He oversaw modernization of the existing Seminary building and construction of a large new dormitory, and supervised several stages of the Seminary’s academic accreditation.

As deputy abbott of St. Tikhon’s Monastery, he continually reinforced the monastic community by receiving new members. He also spearheaded construction of a new bell tower next to the church, which was the original home of an icon repository and erection of a mausoleum at the cemetery. He hosted several monastic and other conferences as well as continuing the tradition of an annual Memorial Day weekend pilgrimage for the faithful that have taken place since the monastery’s founding in 1905.

Bishop (later, Archbishop) Herman represented the OCA at numerous events abroad, often traveling with Metropolitan Theodosius to Russia and elsewhere. As an OCA hierarch, he participated in the historic conference of North America’s Orthodox bishops in Ligonier, PA, in 1994. Several patriarchs and numerous hierarchs from around the world visited St. Tikhon’s Monastery for the annual pilgrimage or other celebrations throughout the years as guests of Metropolitan Herman.

Metropolitan Herman was well known as a proponent of the Sanctity of Life. For many years he participated in the March for Life held in the U.S. capitol every January, leading the Orthodox participants and addressing thousands in defense of the unborn.

On April 2, 2002, Metropolitan Theodosius submitted a petition requesting retirement to the Holy Synod of the OCA. The Synod granted his request and announced that the election of his successor would be held on July 22 at the OCA’s Thirteenth All-American Council in Orlando. No candidate received the required two-thirds majority for immediate election during the first round of voting, which made a second ballot necessary. During the second round, Bishop Seraphim of Ottawa and Canada received the majority of votes, but the Holy Synod chose to elect Archbishop Herman. The enthronement of Metropolitan Herman took place during the Divine Liturgy on September 8, 2002, at St. Nicholas Cathedral in Washington, D.C. Numerous prominent Orthodox hierarchs and dignitaries from around the world attended the enthronement ceremony and the reception that followed.

During his primatial tenure, in 2005, the title of the primate was changed to “Archbishop of Washington and New York”, consolidating the two dioceses. This placed greater diocesan responsibility on Metropolitan Herman, who ably shouldered this additional burden until his retirement. In 2009 the two dioceses were once again separated as before their merger in 2005.

Metropolitan Herman received numerous awards and honors. In 1994 he was elevated to the rank of archbishop by the Holy Synod of Bishops of the Orthodox Church in America and awarded the Order of St. Innocent Silver Class. He was granted an honorary Doctor of Divinity degree from Nashotah House Seminary in Wisconsin and an honorary Doctor of Business Administration degree from his alma mater, Robert Morris College.

On September 4, 2008, after a somewhat turbulent, short primatial tenure, the Holy Synod of Bishops of the Orthodox Church in America granted Metropolitan Herman’s request to retire as primate of the Orthodox Church in America. The election of his successor took place two months later at the Fifteenth All-American Council. During his retirement Metropolitan Herman quietly resided in a house on the grounds of St. Tikhon’s Monastery until his repose.

St. Vladimir's Seminary was blessed by Metropolitan Herman's leadership and guidance as primate and his presence on campus on numerous occasions.

Metropolitan Herman is especially remembered by those who were seminarians under his mentorship.  Historically, in terms of the development of the Orthodox Church in America, he will be remembered as the second American-born primate of the OCA.

May Metropolitan Herman’s memory be eternal!

This article has been adapted from OCA.org.