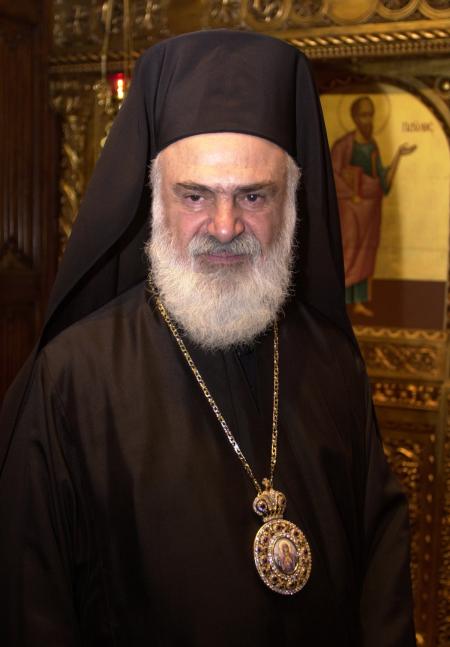 With faith in Christ and hope in the resurrection, we share news of the repose of longtime St. Vladimir’s Seminary trustee His Eminence, Maximos, former Greek Orthodox metropolitan of Pittsburgh. His Eminence was 85 years old.

Metropolitan Maximos served on the Seminary’s Board of Trustees from 1989-2002. He also taught courses in patristics for a time at St. Vladimir’s following the repose of Fr. John Meyendorff in 1992.

His Beatitude, Metropolitan Tikhon of the Orthodox Church in America (OCA) offered condolences on hearing of His Eminence’s repose, and said the late metropolitan was a “pivotal figure” in Orthodoxy in America.

“As a scholar, professor, and pastor, he was beloved by many both within the Greek Orthodox Archdiocese and without. He had a special connection with the Orthodox Church in America, where he was particularly well regarded during the time he spent on the Board of Trustees of St. Vladimir’s Orthodox Theological Seminary, as well as the shorter period he spent teaching there,” wrote His Beatitude.

Born to Father and Presvytera Evangelos Aghiorgoussis in Chios on March 5 1935, the future Metropolitan Maximos attended the Patriarchal Theological School of Halki, where he received his degree in Orthodox theology in 1957. He was ordained a deacon at Halki on April 28, 1957, and ordained to the priesthood on his native island on July 26, 1959. He pursued graduate studies at the University of Louvain, Belgium, where he received a doctorate in theology and baccalaureate in philosophy in 1964. From 1966 to 1979 (his election as a bishop) he taught at Holy Cross Greek Orthodox School of Theology, Brookline, MA as professor of systematic theology. During his tenure at the school, he also served as vice president of Hellenic College and academic dean of Holy Cross. On April 11, 1978, the Holy Synod of the Ecumenical Patriarchate elected him bishop of Diokleia. Archbishop Iakovos consecrated him to the episcopacy on Pentecost Sunday, June 18, 1978, at the Archdiocesan Cathedral of the Holy Trinity in New York City. He was as elected in March 1979 and enthroned as the first bishop of the Greek Orthodox Metropolis (then Diocese) of Pittsburgh on April 27, 1979. In 1997, he was elected metropolitan of the Throne of Constantinople to preside in Pittsburgh, and later in 2003 became metropolitan of Pittsburgh.

The late metropolitan retired due to failing health in August 2011, but continued to be a beloved and much respected figure in the Metropolis, which he served for over thirty years.

The funeral for Metropolitan Maximos will be held at the St. Nicholas Cathedral in Pittsburgh on Saturday, November 7, followed by the interment at St. Gregory Palamas Monastery in Perrysville, OH.

May the memory of Metropolitan Maximos be eternal!

(Many details for this article have been adapted and reprinted from goarch.org)