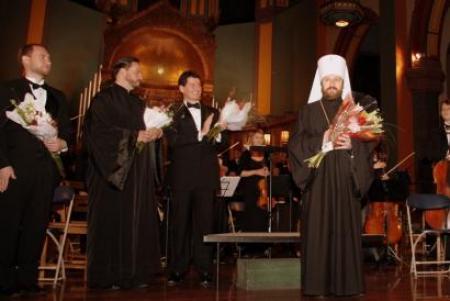 Over 1,000 people streamed into the awe-inspiring Church of St. Paul the Apostle in New York City Monday evening to hear the equally sublime St. Matthew Passion, composed by Metropolitan Hilarion (Alfeyev), an episcopal member of the Board of Trustees of St. Vladimir's Seminary and chairman of the Moscow Patriarchate Department for External Church Relations. The performance—the U.S. English-language premiere of the opus—was hosted by the seminary in cooperation with the Roman Catholic Archdiocese of New York, and it crowned the four-day visit of His Eminence Hilarion to the metro area.

Maestro Greg Hobbs, who next week will also conduct the Dallas premiere of the work, took command of soloists, string orchestra, and chorus to deliver a stately and majestic performance to an overflowing  crowd. Under his baton, The Salomé Chamber Orchestra; famed soloists soprano Mary Mackenzie, mezzo-soprano Ana Mihanovic, tenor Blake Friedman, and bass Aaron Theno; and The New York Virtuoso Singers prepared by Harold Rosenbaum, magnificently elucidated text and music, creating a highly expressive yet sober symphonic experience for the audience. Protodeacon Vadim Gan, who sang the principal baritone part of “The Evangelist,” anchored their rhapsodic voices and soul-stirring strings to scriptural passages, which he intoned with humble subtlety.

Metropolitan Hilarion studied composition at Moscow Gnessins School of Music and subsequently at the Moscow State Conservatory. His musical compositions include the Divine Liturgy (2006), and All-Night Vigil (2006) for a cappella choir; the Christmas Oratorio for soloists, boys choir, mixed choir, and symphony orchestra (2007); and A Song of the Ascent, a choral symphony on the Psalms (2008).

In 1987 Metropolitan Hilarion was ordained priest, and since 2002 he has been a bishop of the Russian Orthodox Church; he was elevated to the rank of archbishop in 2009. A polyglot and exceptionally gifted, His Eminence has authored more than 600 publications, including twenty books that have been translated into major European languages.

Besides attending the premiere in his honor during his New York City stay, Metropolitan Hilarion also delivered the 28th annual Father Alexander Schmemann Lecture, Saturday, February 5th on our campus, and was honored at a book signing at St. Nicholas Russian Orthodox Patriarchal Cathedral, 15 East 97th St., New York, on Sunday, February 6th after Divine Liturgy. Most of the seminary community accompanied our Dean, Archpriest John Behr, and our Chancellor, Archpriest Chad Hatfield, to the cathedral for the Eucharistic service, and several seminary priests concelebrated the liturgy with His Eminence Justinian, archbishop of the Russian Orthodox Church in the USA (Moscow Patriarchate); His Eminence Metropolitan Hilarion; and His Beatitude Jonah, primate of the Orthodox Church in America and president of the Board of Trustees of St. Vladimir's Seminary. Also concelebrating at the liturgy was His Grace Melchisedek, bishop of Pittsburgh and Western Pennsylvania (OCA), who was visiting the seminary for the weekend.

After the Divine Liturgy, at a special reception, Metropolitan Hilarion signed two books that he has published with St. Vladimir's Seminary Press, Christ the Conqueror of Hell: The Descent into Hades from an Orthodox Perspective (2009) and The Orthodox Christianity Set.