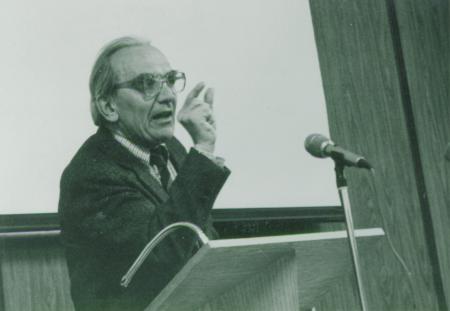 During this Year of Schmemann, St. Vladimir’s Seminary also celebrates 100 years since the birth of another giant in the Seminary’s history: Dr. Veselin Kesich (March 12, 1921–June 26, 2012).

Kesich, professor of New Testament at St. Vladimir’s from 1953 until his retirement in 1991, was beloved by generations of St. Vladimir's alumni, not only for his academic expertise but also for the hospitality and love he demonstrated to students, along with his wife, Dr. Lydia (+2006), over the several decades they lived on the seminary campus. Students still fondly recall the annual traditional Serbian “Slava” celebrated in their home, honoring the professor’s family patron saint.

One of those students, Very Rev. Stavrofor Stevan (Stevo) Rocknage (Class of ’88)—now a longtime priest of St. Sava Serbian Orthodox Church in McKeesport, PA—remembers a man whose “heart was so full of love” and who could make a three-hour talk feel like ten minutes!

“The wonderful thing about Professor Kesich, God rest his soul, were his lectures. They were never really lectures—they were like stories and narratives….

“He taught awareness of the New Testament and the intricacies of reading the Scriptures and how to read appropriately—it was phenomenal,” said Fr. Stevo.  “I remember sitting in class thinking to myself, ‘my goodness!’ He made it so enjoyable. You really wanted to go deeper and even more profoundly into Scripture.” 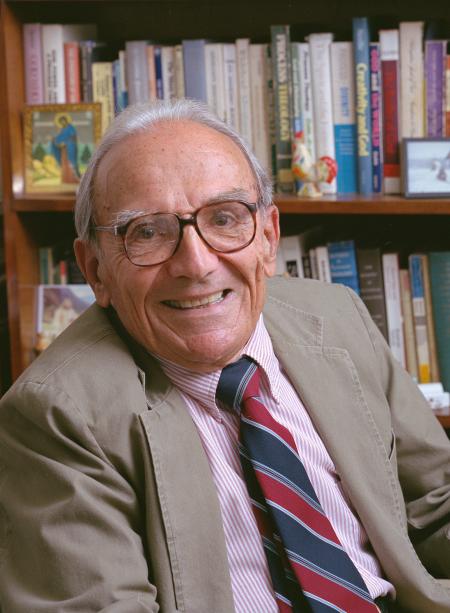 Born in Bosnia, Yugoslavia, Dr. Kesich finished the gymnasium in Banja Luka and started studies at Belgrade University. At the end of the Second World War he lived in a Displaced Persons Camp in Italy until he was selected to study theology at Dorchester College in England. In 1949 he came to New York to continue his studies at Columbia University, St. Vladimir’s Seminary, and Union Theological Seminary, receiving his Ph.D. from Columbia in 1959.

Seminarians interested in scriptural studies, especially during the popular onset of Liberation Theology, historical reconstruction, and the secular Feminist Movement, appreciated Professor Kesich’s spiritually balanced and incisive critical analysis of these movements and trends. Memorable were his several articles in that regard, which were published in the Saint Vladimir’s Theological Quarterly: “The Historical Jesus—A Challenge from Jerusalem,” “St. Paul: Anti-Feminist or Liberator?” and “Paul—Ambassador for Christ, or Founder of Christianity?”.

His other works, all published by SVS Press, include Formation and Struggles: The Birth of the Church (AD 33–200), The Treasures of the Holy Land, The First Day of the New Creation, The Gospel Image of Christ, and The Passion of Christ. 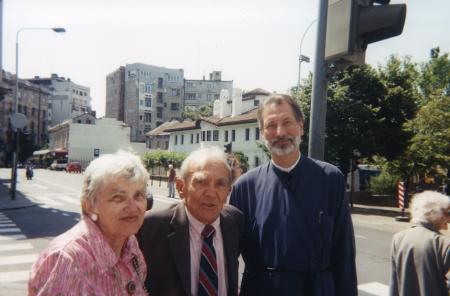 Professor Kesich’s legacy also serves as a beautiful reminder of the Serbian Orthodox presence throughout the history of St. Vladimir’s, which includes many faculty members, seminarians, and trustees.

(Pictured: Drs. Veselin and Lydia in 2004 with now-His Grace Irinej (Dobrijevic), bishop of Eastern America of the Serbian Orthodox Church. His Grace graduated from St. Vladimir's in 1982.)

And his loving presence reminds us all—especially those who knew him, such as Fr. Stevo—the profound impact a life in Christ has on everyone touched by that life.

“When you think about the wonderful atmosphere of Seminary family—and family is really what it was—that Kesich and others like Schmemann, Meyendorff, and Hopko all perpetuated—they treated all of us like their own. That was amazing to me. Here are these professional scholars and luminaries in Orthodoxy, and you felt that in their presence you were the most important person they were talking to. It was just wonderful, it really was!”

May their memories be eternal!

In 2001, the Professor Veselin Kesich Scholarship Fund was established at St. Vladimir’s Seminary with a generous gift from Mr. and Mrs. Brian Gerich in honor of Dr. Kesich. To donate specifically to the Kesich Scholarship Fund, simply write the name of the fund on your check or in the comment section of the Seminary’s online donation form.