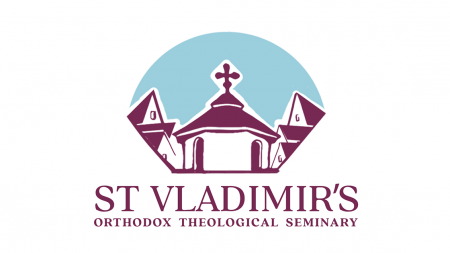 Saint Vladimir’s Orthodox Theological Seminary (SVOTS) has begun rolling out a new logo to accompany new branding for the Seminary.

“We are excited,” said SVOTS President Fr. Chad Hatfield. “There have been so many positive developments at St. Vladimir’s in recent years, and this new logo and branding reflect the encouraging direction our Seminary is moving in.”

The new logo features an artistic recreation of the cross and cupola of the Seminary’s Three Hierarchs Chapel and a new wordmark.  The cross and the image of the Chapel point not only to the Seminary’s Orthodox Christian confession and devotion to Christ, but also the centrality of chapel and prayer life in SVOTS’ training and formation of seminarians. The buildings/houses surrounding Three Hierarchs Chapel in the logo reflect the Seminary’s emphasis on residential life. Together, the Chapel and buildings also symbolize the Church at large, placed in the world within our neighborhoods and communities; the houses look toward the Church for guidance and leadership. The blue sky represents the protecting veil of the Holy Theotokos and Ever-Virgin Mary.

The logo is the centerpiece of SVOTS’ new branding—the first complete branding process the Seminary has undertaken in its history.

“It’s important St. Vladimir’s has a well-designed and intentional brand that guides how we communicate and present ourselves,” said SVOTS Chief Marketing Officer Sarah Werner. “Even the best professors and academic programs or the most interesting events can be missed if the look and voice surrounding everything isn’t making an impact on people.

“Little by little over the next few months, you’ll start to see and feel the Seminary’s new branding on everything we do. And there’s still more to be revealed.”

Along with the new logo, the Seminary’s branding introduces the use of new colors, primarily violet and “panagia” blue, and includes an updated “Values, Purpose, & Mission” statement.

The familiar St. Vladimir’s Seminary academic seal, which has featured prominently in Seminary communications since 1960 and was updated in 2013, will continue to be used together with the new logo.