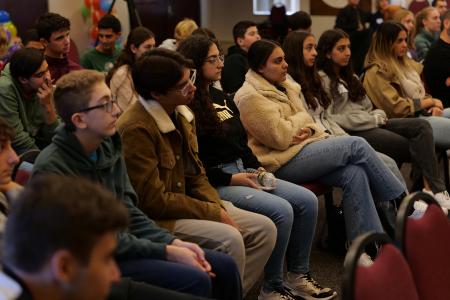 Fr Nicholas Belcher (M.Div. '05, former lecturer on Antiochian Liturgics) gave the primary talk for the retreat, encouraging the teens in living out their faith with the support of a “matrix” of godly friends, teachers, and spiritual advisors. Fr Nicholas is Chair of the Youth & Young Adult Ministry Task Force for the Antiochian Archdiocese, former Dean of Students at Hellenic College Holy Cross, and an experienced counselor and speaker for youth programs and events.

Following the main talk, ten SVOTS seminarians from the Antiochian Archdiocese and three from the Orthodox Church in America (OCA) shared their experiences at the Seminary with the teens. The male and female seminarians who spoke represented a diverse cross-section of the SVOTS student body and several of the degree programs offered at St Vladimir’s Seminary. Students introduced themselves, talked about the daily routine at Seminary, and discussed their decision-making process in coming to study at St Vladimir’s.

Dn Joseph Thornburg (3rd year, M.Div.), reemphasized Fr. Nicholas Belcher’s earlier point about cultivating a “matrix of people you can go to, who can speak into your life, and pray with you through the difficult choices” in discerning a possible vocation in Church ministry.

“When you’re doing the thing that God wants you to do, he creates the path for you,” Fr Nicholas Fine (3rd year, M.Div.) remarked, encouraging the teens to seek out their future paths with trust in God.

After a lively discussion with SVOTS seminarians, the retreat participants enjoyed lunch on the seminary grounds and participated in various service projects to help beautify the campus. Service projects included picking up trash along the roadside bordering the campus, as well as putting together furniture.

To close out the day, the group celebrated an early Vespers service in Three Hierarchs Chapel, with the teens joining seminarians in reading and chanting.