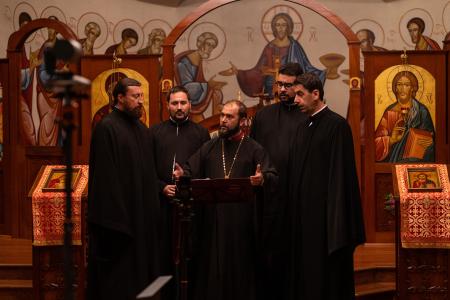 "We were enveloped in prayer through your incredible, incredible way of presenting the Byzantine tradition," Seminary President Fr. Chad Hatfield said as he addressed the members of Tronos following their performance. He also praised the seminarians who performed during the evening, speaking of how proud their performance makes the Seminary community.

Watch a replay of the concert below.

The concert at St. Vladimir’s was part of a series of performances by Tronos throughout the United States in the month of September, at the invitation of His Eminence, Metropolitan Nicolae of the Romanian Orthodox Metropolia of the Americas.

Tronos Psaltic Group is among the most well-known Byzantine choirs in Romania. Tronos was created in 1997 at the initiative of Archdeacon Mihail Bucă, the protopsaltis of Bucharest’s Patriarchal Cathedral of Saints Constantine and Helena. The name “Tronos” was given to the group in 2007 by His Beatitude, Patriarch Daniel. Over its more than twenty-year history, the choir has recorded several albums and performed Byzantine sacred music at venues throughout the world.