Alexander Earl is a 28-year-old Master of Divinity student in his first year at St. Vladimir’s Orthodox Theological Seminary (SVOTS). A graduate of Yale Divinity School, he had been on his way to becoming an Anglican priest when he discovered Orthodoxy reading St. Vladimir’s Seminary (SVS) Press books for his patristics classes. He and his wife, Danielle, who is now the librarian at SVOTS, were teaching at a private high school in the Los Angeles area when they attended their first Divine Liturgy in 2017. Feeling like they had come home spiritually, they were received into the Orthodox Church the following year. In this interview, Earl discusses the many religions he sampled before coming to the faith and his hopes for contributing someday to the evangelization of the U.S. as an Orthodox priest. 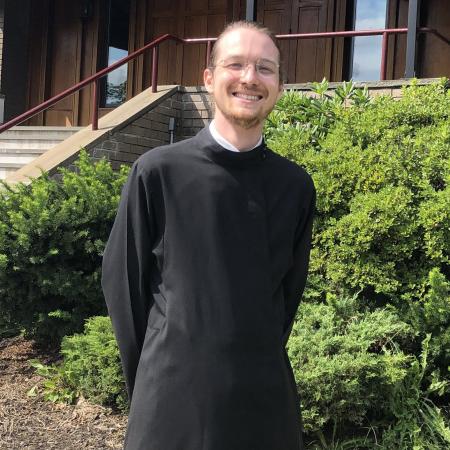 Q: Tell me about yourself.

AE: I was born and raised in Orlando, FL. My family was culturally Christian but it was vague, and I was not raised to go to church. My mom started going to the Baptist Church later in life, but that was not something I was interested in at all. Basically I was an atheist. I lived an Augustinian life; I partied a lot as a young man. By the time I graduated from high school, I thought there has to be more to life than pursuing materialism, so I explored other religions. I went to a mosque. I went to a Buddhist temple. I even explored Mormonism. I was open to whatever claimed to be the truth. Liturgical Christianity won out for a lot of reasons, so I converted to Anglicanism when I was around 18.

I went to Yale to pursue ordination to the priesthood in the Anglican Church. I started to have my doubts so I began to investigate the Orthodox Church and the Catholic Church. I met my wife at Yale, and when we graduated we moved to Los Angeles for work. The more I read about Orthodoxy, the more I began to feel like this was the Christianity I had always believed in. After my first Divine Liturgy at St. Matthew’s Orthodox Church (Antiochian Archdiocese) in Torrance, CA, I turned to my wife and I said, “this is it.” Danielle’s background was Baptist but a big chunk of her family is Armenian Orthodox, so she felt like she was coming home.

Q: What is the difference between attending seminary at Yale and attending SVOTS?

AE: At Yale it was all about historical criticism as a way of dealing with Scripture. Postmodernism is the method of the day, deconstruction. How do we pull these things apart? There was no idea whatsoever that these texts have been read and reflected on and prayed over by the fathers. The sensibility was that we are more enlightened; we know better than, say, Gregory Nazianzus.

I was introduced to St. Vladimir's at Yale. For our patristics courses all of our books came from SVS Press. I had read [Fr. Alexander] Schmemann early on and I kept engaging with SVS Press even after Yale. I knew about the seminary and that it had a reputation for being an academically serious institution. Even when I was Episcopalian I had this admiration for it. Then when I became Orthodox, I knew I wanted to go to St. Vladimir’s.

Q: Now that you are at SVOTS, has it lived up to your expectations?

AE: I love it. In many ways it is exactly what I thought it would be. So right now I am really loving the classes, the professors, talking to professors, the ideas, the theology, the philosophy. I love the perspective. These are serious scholars here who have impressive CVs. It can be just as academically rigorous as Yale but it has not wed itself to postmodernity. There is a special awareness in the scholars here. They are more willing to be critical of modernity and postmodernity. In fact, there is something more postmodern about an Orthodox scholar because they are more willing to question our working assumptions. However, the purpose is not merely deconstruction, but an ability to be critical of ourselves so we can be more humble in engaging these thinkers and texts.

Q: What do you think of the liturgical life at SVOTS?

AE: Even given COVID, it’s fantastic. It is amazing to be doing this stuff in the classroom, yet your whole life is structured around attending Matins, Vespers, Liturgy, the feasts. It is a life-giving rhythm. Father Chad [Hatfield, president of SVOTS] said that there is a kind of Benedictine spirituality here in the rhythms of prayer and work. I think he is right. I think it is really important that the structure is there.

Q: What made it possible for you to attend SVOTS?

AE: I wouldn’t be here without Fr. Chad. I was interested in St. Vladimir’s but, for a number of reasons, I didn’t think I would come here for another year or so. I put in an application for this year thinking that it would be for the following year. Father Chad reached out to me and he said, “We want you to come here.” I wanted to come, but there were so many hurdles. He assured me to not worry about it and he cleared the hurdles. It is really a miracle. Danielle and I were teaching but, even before St. Vladimir’s she had said that she wanted to be a librarian. When we saw St. Vladimir’s was hiring, I said why don’t you apply [at SVOTS] and we’ll see what God does. Here we are.

Someone like Fr. Chad really excites me. He has a background in missions and started all these churches. He cares deeply about evangelism. He was a former Anglican; I am former Anglican. He really has a sense of what the future of Orthodoxy ought to look like in the U.S. For these reasons I am really happy Fr. Chad is at the helm, leading St. Vladimir’s into the future.

I also would like to add that Dr. [Alex] Tudorie [SVOTS’ academic dean] has made my transition here lovely. It was entirely plausible that I would come here and have to do introductory course work all over again. I would happily have done so, but it would certainly have felt like a waste of an opportunity to go deeper and make the most of what St. Vladimir’s has to offer. Working with Dr. Tudorie in that regard has been a blessing. He’s been a great academic advisor in discerning how St. Vladimir’s can contribute to my existing academic background, instead of merely overwriting it.

Q: Who are some of your favorite professors at SVOTS?

AE: Father Bogdan [Bucur, associate professor of patristics] brings a really fresh perspective. He was a student of Archbishop Alexander Golitzin. He and the other professors definitely have picked up the Schmemann/Florovsky neopatristic synthesis, but Fr. Bogdan also brings in the Jewish mystical tradition and Biblical theophanies. He calls these theophanies of God the “greatest hits” of scripture. It’s the driving theme of the whole thing. He is likewise a very serious scholar who I think bridges this divide between academia and spirituality. Through him, you get a sense that when we are studying the fathers and the biblical witness, we are simultaneously on the journey to encountering God.

Q: What do you think of the community life at SVOTS?

AE: Coming to a new place inevitably comes with some anxiety. Everyone who comes here wants to have a community. Many people here are preparing for the priesthood, a unique vocation. But everyone here has been so hospitable and inviting. There is no sense of judgment. I don’t feel out of place being a convert; there are many converts here. There’s no pretentiousness, either. At other institutions, the senior students might think this place belongs to them. But I haven’t found that here. The atmosphere is very collegial, very friendly. If there were anxieties, they are no more.

Q: You have spent time as a teacher and you attended academically rigorous institutions. What role do you think academia plays in the priesthood?

AE: I do think academia is so important to Orthodoxy. Part of evangelizing the U.S. will be intellectual and academic. Orthodoxy sometimes likes to distance itself from scholasticism. Yet it’s a mistake to think being intellectually rigorous means being a Western scholastic. If you are a priest going out into the world, and if you are not able to substantively answer people’s intellectual questions, you’re in trouble. You have to show them how to experience the beauty of the Liturgy. They [young people] are so estranged from reality. The intuitive sense that God exists is not the norm. They need their roadblocks cleared. Orthodoxy’s strength is that it recognizes that answering those questions is but the gateway to entering the Church’s ascetic and liturgical life. That’s always the end goal. Danielle and I share that vision because we both came to Christianity from outside of it, so perhaps we have a sense of what it takes to get inside of it.