Alumnus consecrated as Bishop Gerasim of Fort Worth 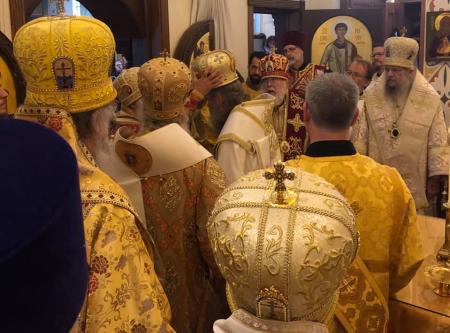 On Tuesday, June 29, 2021, bishops of the Orthodox Church in America (OCA) gathered at St. Seraphim Cathedral in Dallas, TX for the consecration to the Holy Episcopate of Bishop-elect Gerasim (Eliel) to be the bishop of Fort Worth, auxiliary to Archbishop Alexander and the Diocese of the South. Many alumni and faculty from St. Vladimir's Seminary were present, including St. Vladimir's Seminary President Archpriest Chad Hatfield and Professor Dr. Vitaly Permiakov.

On the eve of the consecration, before the Great Vespers for the feast of Ss. Peter and Paul, His Beatitude Metropolitan Tikhon, together with the gathered bishops, celebrated the Nomination and Proclamation of a Bishop, which began with Archpriest Alexander Rentel, chancellor of the Orthodox Church in America, reading the official announcement of the election. In his acceptance, Bishop-elect Gerasim reflected on responding to the call of God in the Church. Quoting the final matinal psalm, he expressed his desire to know “the way in which to walk,” not only for himself but for the faithful of the Diocese. He closed asking for the guidance of the bishops in exercising his new episcopal ministry. Bishop-elect Gerasim then celebrated the Great Vespers service. 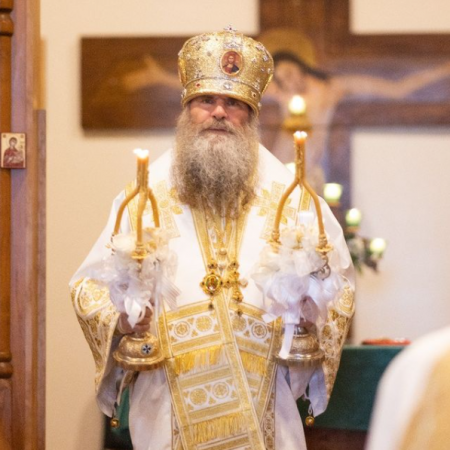 Before the beginning of the Divine Liturgy commemorating Ss. Peter and Paul, Bishop-elect Gerasim offered his statement of faith, proclaiming the Nicene-Constantinopolitan Creed, and offered a detailed explanation of the Church’s Trinitarian and Christological doctrines in the presence of Metropolitan Tikhon and the assembled hierarchs, clergy, and faithful. He pledged his commitment to uphold the Church’s canons and the teachings of the Holy Fathers and to preserve unity with his brother bishops.

During the Divine Liturgy, before the Little Entrance, awards were granted to numerous priests of the Diocese of the South by Metropolitan Tikhon on behalf of the Holy Synod and Archbishop Alexander. In addition to Archpriest Paul Yerger receiving the right to wear the mitre, in honor of his almost 44 years of service in the priesthood, Archpriests Thomas Moore (St. Vladimir's Seminary class of '99), Stephen Freeman, and Marcus Burch ('97) were awarded the jeweled cross; Hieromonk Arkady (Migunov) was raised to the rank of Igumen; Priests John Mikita, Nikolay Miletkov ('06), and Basil Biberdorf ('05) were raised to the rank of Archpriest; Priest John Cox ('11) was awarded the gold cross; Protodeacon Steven Kroll was awarded the right to wear the kamilavka; and Deacons Theophan Warren and Gregory Conley were raised to the rank of Protodeacon.

In his homily, Metropolitan Tikhon emphasized the centrality of the apostolic teaching of Saints Peter and Paul, that God revealed Himself to us in the person of Jesus Christ, and that the apostolic mission is to bring all peoples and all nations to faith in the one God and Father. His Beatitude charged everyone to imitate the pattern of the apostles as revealed in their writings, that our faith would lead to knowledge, and knowledge to greater faith.

During the Divine Liturgy, the newly consecrated Bishop Gerasim ordained Deacon Jeremiah McKemy to the Holy Priesthood and Subdeacon Theophan Alvarez to the Holy Diaconate.

At the conclusion of the Divine Liturgy, Metropolitan Tikhon welcomed all those assembled and thanked the gathered bishops, especially welcoming the guest bishops from the Georgian Orthodox Church and the Russian Orthodox Church Outside of Russia. Finally, he congratulated the newly consecrated Bishop Gerasim and exhorted him to always remember to show mercy, consolation, and kindness to the flock of the Diocese of the South. He charged him to work in unity with Archbishop Alexander and all the bishops and faithful of the diocese in order to build up the work of the Church [Read the full text here]. With those words, he presented the Archpastoral Staff to Bishop Gerasim. Bishop Gerasim then ascended the cathedra to bless the gathered clergy and faithful.

Leading up to His Grace's consecration as bishop of Fort Worth, Bishop Gerasim had been serving as rector of St. Seraphim of Sarov Cathedral in Dallas, TX, administrator of the Diocese of the South Diocesan Council, and dean of the Diocese’s Southcentral Deanery.

Bishop Gerasim graduated from St. Vladimir’s Seminary with a Master of Divinity degree in 2012. He was the class valedictorian and also received commendations for contribution to community life and for his thesis, Russian Icons in a Native Church: Conflict in Culture in Western Alaska.

This article has been adapted from OCA.org.