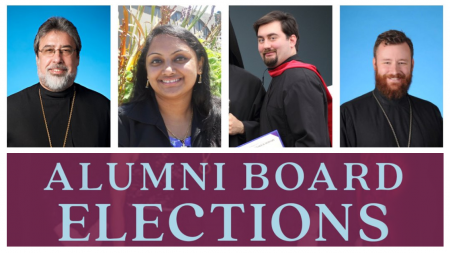 Seminary President, Archpriest Chad Hatfield congratulates the new members of the alumni board and expresses his eagerness to work together in service to our graduates and in finding new ways to better serve alumni.

Nominations for Alumni Board members were submitted to the Nominating Committee between January 25 and February 15, 2021.  Once the list of nominees was vetted and a list of candidates approved, alumni cast votes electronically between March 3 and March 7, 2021, as the SVOTS’ Alumni Association Board sought to fill four seats on the board.

The Board elections continue a busy and eventful period for the Alumni Association. On February 5, the Seminary’s Board of Trustees approved updated Association Bylaws. And in October of 2020, the Seminary held an online alumni gathering and launched the Alumni Portal to give SVOTS graduates access to resources, news, events, and an alumni directory.

About the Newly-Elected Alumni Association Board Members

Father Basil Zebrun is an archpriest of the Orthodox Church in America who has served the Church in multiple capacities since graduating from SVOTS in 1983. Father Basil began his priestly ministry at Ss. Cyril and Methodius Orthodox Church in Hartshorne, OK and is currently priest of St. Barbara Orthodox Church in Ft. Worth, TX, where he has served since 1987. He has also served as secretary to His Eminence, Archbishop Dmitri (Royster) for nearly a decade; managing editor of the diocesan newspaper The Dawn; dean of the Southcentral (Dallas) Deanery of the Diocese of the South, and recording secretary for three All American Councils and for Diocesan Assemblies. Father Basil and his wife, Matushka Christine (SVOTS Class of ’80 and former co-chair of the OCA’s Department of Christian Education), have two grown sons and a granddaughter.

Father Photius Avant is a native of East Texas. After receiving his BA in Literature from the University of North Texas, he taught middle school and high school English. He graduated St. Vladimir’s with a Master of Divinity degree in 2011 and was assigned to St. Sava Orthodox Church (OCA) in Allen, TX as assistant priest. In 2014, he was made rector. He led the parish through the building of a new temple in 2018. His wife Carissa is an accountant and directs the choir. They have four children.

Mariam Ceena Varghese holds two degrees from St. Vladimir's Seminary, a Master of Theology ('10) and Master of Arts in Theology ('09).She also holds a degree in Bioinformatics & Computational Biology from the University of Maryland. After seminary, Ceena worked as the resource coordinator of the Youth and Young Adult Ministries Department of the Greek Orthodox Archdiocese of America for three years, and taught a few classes at St. Vladimir’s for four years. She also served as a curriculum writer for an Orthodox project of Gospel Light Worldwide & World Vision and was part of the team that represented the Malankara Orthodox Syrian Church at the last World Council of Churches, in South Korea. Ceena is involved in various ministries of the Malankara Orthodox Church, working with children, youth, and adults. She now lives in KY where she works as an IT Analyst, and lives with her husband and one-year-old son.

Richard Ajalat graduated from St. Vladimir's Seminary in 2013 with a Master of Divinity degree. He was a youth director in Livonia, MI for one year after seminary. He has been a pastoral assistant at St. Michael Church in Van Nuys, CA for the past seven years, doing everything from keeping fundraising records on the building of the new Church, to youth and young adult ministry, to other typical pastoral assistant duties including liturgical duties and serving as liaison between church leadership and church ministries. Richard serves on the FOCUS NORTH AMERICA national board and the St. Michael parish council, and he is Vice President of the Young Adult Ministry of the Antiochian Diocese of Los Angeles and the West