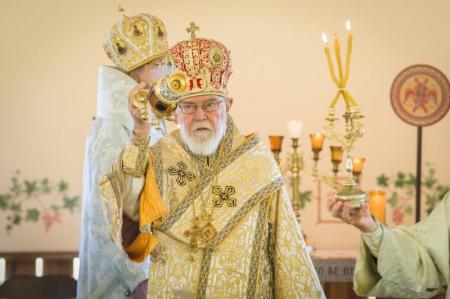 Scholarships are one of the ways St. Vladimir’s Seminary supports seminarians who are preparing to serve the Church through a variety of callings—whether ordained ministry, chaplaincy, scholarship, teaching, sacred arts, or a variety of other vocations. Last year alone, the Seminary awarded $400,000 in scholarships from its endowments to aid seminarians. Additionally, the Seminary’s Tuition-Free Initiative allows future Church leaders to attend St. Vladimir’s free of tuition expenses. Saint Vladimir’s strongly believes servants of the Church should not be saddled with tuition debt from their theological education as they go forth to serve Christ.

Some years ago, Protobresbyter Thomas Hopko (+2015), dean at the time of St. Vladimir’s Seminary, was invited to speak at a meeting of the Holy Synod of Bishops of the Orthodox Church in America.

When asked about seminarians, Fr. Thomas reported that seminarians rarely came from the older, established Orthodox parishes in North America. Most, he said, were converts.

“I thought, ‘my goodness, why is it from our own parishes we don’t have more vocations?’” said His Eminence, Archbishop Nathaniel (Popp) of Detroit and the Romanian Episcopate.

From that moment, His Eminence though about what he could do to help.

“Maybe there is a financial problem among homes and families, certainly if you think about a young married person who would come to seminary but doesn’t want to cut off their family from the income they were making. I thought maybe something I could offer might help them out.”

Archbishop Nathaniel set out building up an endowed scholarship fund to help Eastern Orthodox men in North America pay for theological education at either St. Vladimir’s, St. Tikhon’s, or Holy Cross Orthodox seminaries. In 2018, with a generous gift from His Eminence, The Joseph and Vera (née Boitor) Popp Scholarship Endowment was launched, named in honor of Archbishop Nathaniel’s parents. The scholarship awards $5,000 to one seminarian each year.

“For a bishop of His Eminence’s stature in the Church to have taken such a lead in helping address the shortage of clergy shows great leadership and is an example to us all,” said Ted Bazil, St. Vladimir’s Planned Gift Officer. “It brings to mind the generosity of another hierarch, Archbishop Kyrill [Yonchev], who helped set up a scholarship fund in the 1980s for seminarians preparing for priesthood.”

The Archbishop Kyrill (Yonchev) Theological Scholarship Fund is still among the many endowed and annual scholarship funds managed by St. Vladimir’s Seminary, along with Archbishop Nathaniel’s newer scholarship.

The first seminarian to benefit from Archbishop Nathaniel’s generosity and vision was Philip McClanahan, who has since graduated from St. Vladimir’s (’21) and is preparing for service in the Church, particularly in the mission field.

“One thing needed in Orthodox missions is more Orthodox clergy,” said McClanahan, who added that getting a solid grounding in liturgics and patristics were some of the motivating factors that led him to St. Vladimir’s. “…And that has been very wonderfully fulfilled here at seminary. There’s been so much here that’s been helpful.”

May God grant His Eminence, Archbishop Nathaniel—and all whose generosity and giving has helped support men and women serving the Church—many years!

To donate to any scholarship fund, such as The Joseph and Vera (née Boitor) Popp Scholarship Endowment, simply indicate the name of the fund on your check or in the comments section of the Seminary’s online donation form. A list of endowed and annual scholarships offered through St. Vladimir’s may be found here.

If you would like to establish a new endowed scholarship fund, you will be able to work with our team to determine the award’s eligibility criteria. You can support a student based on their degree program, geographical background, career goals and many other things.