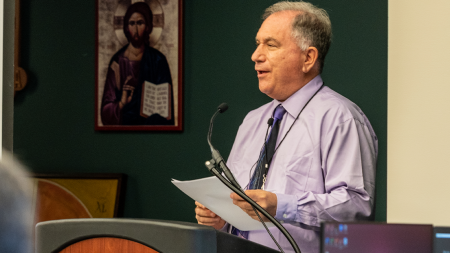 On September 16–18, 2022, the Orthodox Christian Leadership Initiative (OCLI) hosted their sixth Annual National Orthodox Advanced Leadership Conference at St Vladimir’s Orthodox Theological Seminary (SVOTS). The conference theme, “Money: The Gospel Changes Everything,” drew a pan-Orthodox crowd of over 100 clergy and lay participants, both in-person and online, hailing from multiple locations in the US and abroad.

The three-day conference featured a diverse panel of twelve clergy and lay leaders, who explored the topic of money and financial management from a biblical standpoint. Speakers laid out a Christ-centered perspective on wealth and financial management, guiding the attendants through the concepts of generosity, almsgiving, and Christian stewardship in the Orthodox Church.

The first presentation was given by Dr Andy Geleris, whose recent book, Money & Salvation: An Invitation to the Good Way, points out the inconsistencies between the Gospels’ teaching on money and a prevailing idea among Christians that finances are “unspiritual” and a topic to be avoided. In his talk, “Salvific Giving,” Dr Geleris called attention to the fact that Jesus addressed finances and possessions very often in his teachings, and in each instance, he consistently focused on the salvation of the giver, rather than the earthly outcome for the recipient. Dr Geleris highlighted the encounter between Jesus and the rich young man (Matt 19.16–22), where Jesus commands him to give all of his wealth to the poor, primarily “in order to remove a significant obstacle to the man’s ability to inherit eternal life.”

Another headlining presentation was given by SVOTS president, The Very Rev. Dr Chad Hatfield, “The Cure of Souls and the Absence of Stewardship,” in which he called on both clergy and laypeople to think of “stewardship as part of working out our salvation in our parishes and in our individual lives.” The topic of stewardship was also addressed by Fr Barnabas Powell, who spoke on “The Parish as Steward,” and The Very Rev. Dr Robert Holet, with his talk on “Biblical and Patristic Foundations of Stewardship.”

His Grace Bishop Alexei of Sitka and Alaska put forth the patristic definition of giving as a virtue of paramount importance in his talk, “Giving as a Transformative Spiritual Discipline.” Other fascinating lectures given in the three-day event included “Tempted by Accumulation,” by Presbytera Stacey Dorrance; “Tithing: A Baby Step,” by The Very Rev. Fr Patrick O’Grady; “Tempted by Wealth,” by Gabriel Otte; and “Almsgiving as Mercy Giving,” by The Very Rev. Fr Aaron Warwick. Other conference resources are available on the OCLI website.

The Seminary and OCLI plan to co-host the next Advanced Leadership Conference in fall 2023. St Vladimir’s has also collaborated with OCLI to offer a Master of Arts Degree in Orthodox Christian Leadership Studies, with the hope of equipping leaders who serve their parishes, schools, non-profits, and workplaces with servant leadership formation and practice. 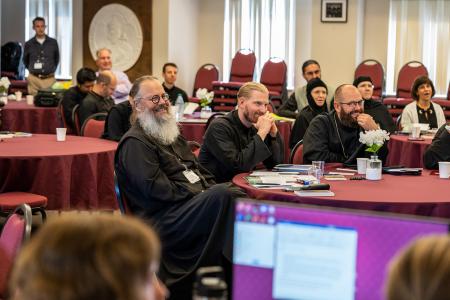 Originating from the Orthodox Vision Foundation and its annual Orthodox Advanced Leadership Conferences beginning in 2017 and hosted at St Vladimir’s Seminary, the Orthodox Christian Leadership Initiative was established as a 501(c)(3) nonprofit in October 2018.