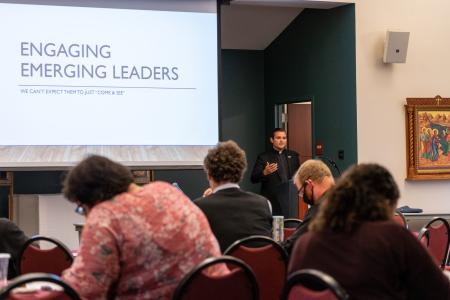 The event, which allowed in-person and online participants this year, drew More than 100 people representing four countries, nine Orthodox jurisdictions and even non-Orthodox, and twenty-three states across the United States. Nearly half of the participants joined the conference onsite, and participants from Australia and India joined in the middle of the night!

“My first time, and I thought this conference was amazing!” said one conference-goer. “It was very well organized, a lot of great information was given, and I enjoyed meeting so many people.”

“We had nearly equal representation from men and women among our younger emerging leaders, seasoned lay leaders, and clergy which allowed for such an enriching experience and exchange of insight and ideas,” said OCLI Executive Director Hollie Benton (SVOTS’ class of 1999). “We have so many creative and hard-working servant leaders whose ministries support mentoring, making early life transitions, and hearkening to God’s call with a spirit of generosity rooted in responsibility and gratitude to all that our Lord has provided!”

OCLI planned an online follow-up event for participants and will make videos of the conference presentations available for them.

Originating from the Orthodox Vision Foundation and its annual Orthodox Advanced Leadership Conferences beginning in 2017 and hosted at St. Vladimir’s Seminary, OCLI was established as a 501(c)(3) nonprofit in October 2018.