St Vladimir's Seminary holds commencement for the Class of 2022 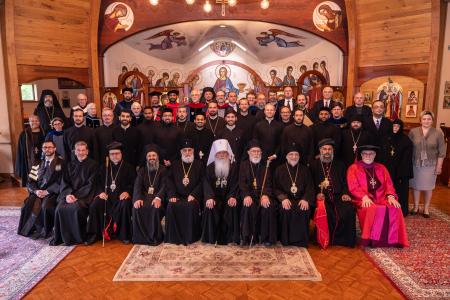 Giving thanks to God, St. Vladimir’s Orthodox Theological Seminary hosted commencement exercises for the graduating class of 2022 on Saturday, May 14. 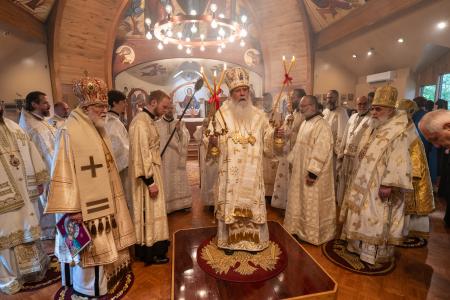 As is customary on the day of graduation, the Seminary community celebrated Divine Liturgy in the morning at Three Hierarchs Chapel. The occasion was particularly blessed with multiple hierarchs present: His Beatitude, Tikhon, archbishop of Washington and metropolitan of All America and Canada of the Orthodox Church in America (OCA); His Eminence, Grigoli, metropolitan of Poti & Khobi of the Georgian Apostolic Orthodox Church; His Eminence, Nathaniel, archbishop of Detroit and the Romanian Episcopate (OCA); His Grace, Saba, bishop of the Georgian Apostolic Orthodox Church in North America; and His Grace, Andrei, bishop of Cleveland and auxiliary to the Romanian Orthodox Episcopate of America (OCA).

The community, hierarchs, and other clergy and guests gathered again in Three Hierarchs in the afternoon for a Moleben of Thanksgiving before the start of the commencement ceremony. 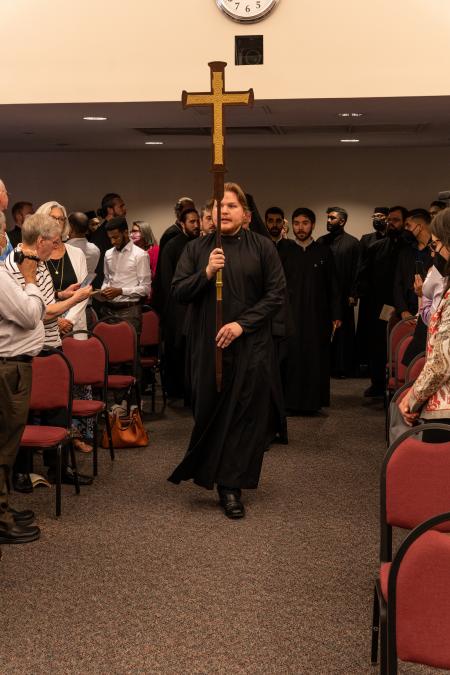 The graduating class, seminary faculty, and hierarchs—while chanting the Paschal Troparion, “Christ is Risen from the Dead”—then processed from the chapel into the John G. Rangos Family Foundation Building for the 83rd Commencement Exercises of St. Vladimir’s Orthodox Theological Seminary. His Beatitude, Metropolitan Tikhon opened the ceremony at the Metropolitan Philip Auditorium. 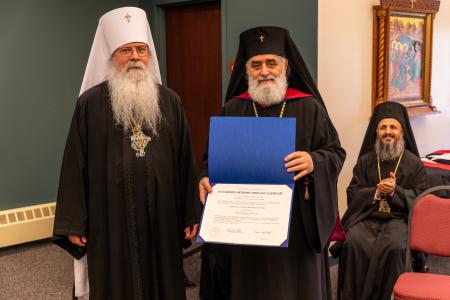 Archbishop Nathaniel delivered a beautiful word of thanks to God on receiving the honorary doctorate. His Eminence also thanked Metropolitan Tikhon and the entire Seminary Board of Trustees, faculty, administration, and seminarians for the honor as well as for all that they do in service to Christ. His words to the graduates were particularly moving, telling them though he may not know each and every one of them personally, he loved them all: 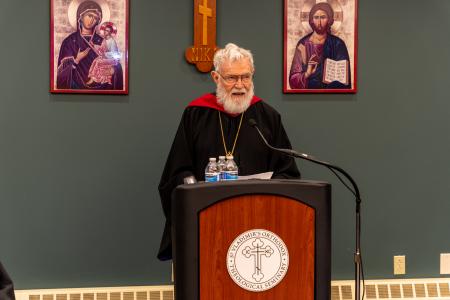 Archbishop Nathaniel, in addition to his long and faithful service in the Church, is also known for his generosity and philanthropic endeavors—including on behalf of seminarians. His Eminence is chairman of the V. D. Trifa Romanian American Heritage Center in Grass Lake, MI and organizer of the “Help for Romania Fund.” In 1990, he co-founded the “Help the Children of Romania” project and, since 1991, he has served as chairman of the Congress of Romanian Americans [CORA]. Recently, His Eminence established endowed scholarship funds to help Eastern Orthodox men and women in North America pay for theological education.

Metropolitan Grigoli is also noted for his efforts in ministry and education. Among his other duties, His Eminence is rector of New Georgian University in the Republic of Georgia—a university that became a partner of St Vladimir’s Seminary in 2019; editor-in-chief of Uplis Tsikhe, the journal of the Georgian Patriarchate; and head of the representative committee of the Georgian Patriarchate for the relationship with the state on issues of education. Metropolitan Grigoli has written extensively on Christianity and human rights, among other topics, and also penned a short catechism. He has been recognized numerous times by Church and state in the country of Georgia. His ecclesiastical and state awards include the Golden Order of St. George (by decree of the catholicos-patriarch of all Georgia) and the Presidential Order of Excellence (by decree of the president of Georgia.

The Graduating Class of 2022 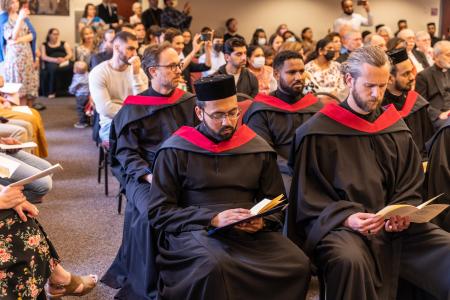 Dr. Tudorie again took the podium to conferral degrees upon fifteen seminarians graduating in 2022. Ten seminarians graduated from St. Vladimir’s Master of Divinity (M.Div.) program, four from the Master of Arts (M.A.) program, and one from the Master of Theology (Th.M.) program. Many of the graduates were recently ordained to holy orders (they were among twenty-one seminarians and alumni ordained over the past academic year and summer—Glory to God!). The graduating class represented eight Eastern and Oriental Orthodox churches and jurisdictions: the OCA; AOCANA; Greek Orthodox Archdiocese of America (GOA); Romanian Orthodox Church; Syriac Orthodox Church of Antioch (including Malankara Syriac Archdiocese of North America); Armenian Apostolic Church; Malankara Orthodox Syrian Church; and Eritrean Orthodox Tewahdo Church.

Class of 2022 Salutatorian Subdn. Daniel Hanna and Valedictorian The Rev. Anthony Machnee offered profound words to the community during their respective addresses. 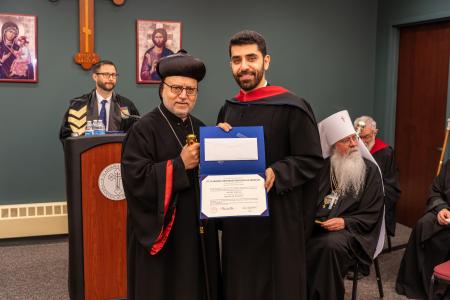 “Wherever we end up, or whatever our function, our purpose will be one and the same,” said Subn. Daniel, “to share the love of Jesus; to let people know that Jesus came to save sinners; to let people know that Jesus loves them. For it is the love of Jesus that brings healing to the broken and wounded, as it is written: ‘He heals the broken-hearted and binds up their wounds’ (Ps. 146:3, LXX).”

“A good valedictory address should tell the graduating class to go and change the world, and yet that message is somehow not entirely aligned with the experience we have had here and with the goal of our lives as Christians,” said Fr. Anthony. “The truth is that we have really only scratched the surface of what our faith has to offer, and I myself feel as though I have hardly begun to learn…. 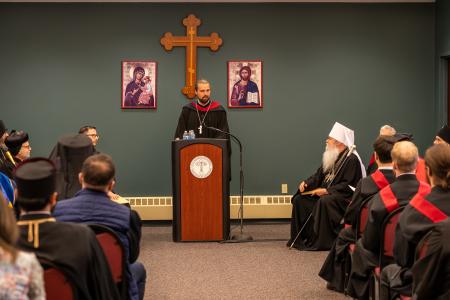 “Our goal is not to change the world, but to live. It is to experience God on God’s terms and allow Him to work in our lives. It is to love the people who will let us love them. It is to be the friends of God and the friends of the friends of God. In all, our work will be transformational only insofar as we are the ones being transformed as we apply the knowledge and skills we have gained here. And if we are able to allow this to take place, we will fail, but Christ will succeed through us, for Christ is everything.” 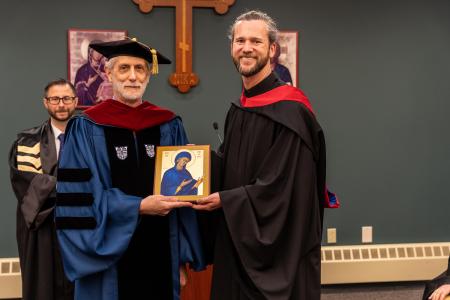 “I can’t imagine that anybody did a better job staying engaged with their students during lockdowns and Zoom classes and weird set-ups and masks—Dr. Barnet really went above and beyond, both pedagogically and personally,” said Fr. Thomas.

Dr. Barnet was gracious and touchingly highlighted other teachers as he thanked the students for the honor.

“For a teacher there is nothing more gratifying than being acknowledged by students, but also nothing more humbling than this acknowledgement,” Professor Barnet explained. “For I know that if I have been an effective teacher this year, then it is only because my teachers—Fr. Tom [Hopko+], Fr. Paul [Tarazi], Professor [Veselin] Kesich+— taught me well and my colleagues, every one of whom is an outstanding teacher, pushed me to do better. Therefore, by this award not only do you honor me but you also, more importantly, honor them.”

Closing Remarks from His Beatitude

To conclude the Commencement Exercises for the Class of 2022, His Beatitude, Metropolitan Tikhon implored the graduates and all gathered to discern carefully and prayerfully the challenges of living and witnessing Christ to the world, particularly in these times.

As for us, it is easy to get caught up in the whirl of history, in its rhythms, in its patterns. We want to find ourselves on the winning side, and we want our side to win, so we form parties and factions, and we build our identities based on these worldly allegiances. We start to convince ourselves: if only it weren’t for the other side, then the world could be fixed. Maybe we really could arrive at a new golden age, if it weren’t for the bad guys. But, to quote the words of our Master, a Galilean rabbi who lived two thousand years ago and who made the world and everything in it with his own theanthropic hands: “It shall not be so among you.” Our identity as Christians does not begin with history, but with the Lord of history who exists from eternity....We are called not to worldly victories. We can pray and work peacefully, in good conscience, so that righteousness prevails in this world, in our laws, in the life of our neighbors. And if God grants us success in that, we should sing hymns of thanksgiving. But our victory is the victory of the Cross: of a new, better, and eternal life that is breaking into the world because of crucified love. In other words, our victory is the victory of holiness, of strength in weakness, of bold courage in the face of violent power—courage, not to kill, not to win, but to be humiliated and to die and to be defeated in the eyes of the world.

Together with His Beatitude, his brother hierarchs, and all gathered at commencement, May God grant the graduating class of 2022 many years!

Descriptions (From Top): [1] Graduates of the class of 2022 with Metropolitan Tikhon, visiting hierarchs, other distinguished guests, and members of the Seminary's faculty and Board of Trustees [2] Metropolitan Tikhon and visiting hierarchs at Divine Liturgy with clergy from the faculty and student body [3] Seminarian Jared Ries leads the procession into the Metropolitan Philip Auditorium [4] Metropolitan Grigoli (right) is presented his honorary doctorate [5] Archbishop Nathaniel offers a word of thanks [6] Members of the diverse graduating class of 2022 sit together during commencement [7] Salutatorian Subdn. Daniel Hanna (right) is presented his diploma by Archbishop Dionysius John Kawak (Syriac Orthodox Archdiocese for the Eastern United States) [8] Fr. Anthony Machnee delivers the valedictory address [9] Fr. Thomas Miller presents the St. Macrina Award to Dr. John Barnet (left) [10] Metropolitan Tikhon offers concluding remarks