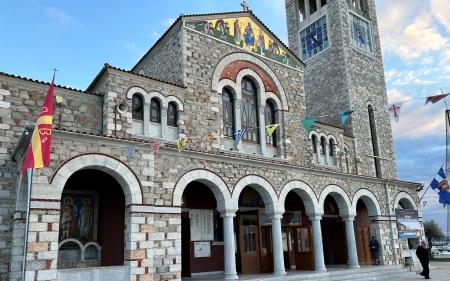 Saint Vladimir’s Orthodox Theological Seminary (SVOTS) faculty members and students participated in the 2023 International Orthodox Theological Association (IOTA) mega-conference (Jan 12-14) in Volos, Greece, alongside over 400 other lay scholars, clergy, and hierarchs hailing from 45 different countries. “Mission and the Orthodox Church” was the overarching theme of the three-day conference; 350 academic presentations were given on the topic of missions and other important contemporary topics related to the work of the Orthodox Church.

The Metropolis of Demetrias and the Volos Academy for Theological Studies cohosted the conference, bringing together scholars from every corner of the Orthodox Christian global community. IOTA President, Prof. Paul Gavrilyuk gave voice to the mission of IOTA, saying, “IOTA is about the worldwide exchange of knowledge within the context of the Orthodox tradition; it is about tearing down the jurisdictional walls that we erected in our collective imagination in order to encounter each other in the freedom of Christian discipleship; it is about breaking out of the silos of specific academic disciplines in order to reflect on the most difficult questions of today with a view of the transformation of culture by the power of the Gospel; finally, it is a place where all Orthodox Christians and our ecumenical friends can have a taste of ‘conciliarity from below.’”

SVOTS faculty members, many of whom also serve in leadership positions for IOTA administration and committees, as well as two students, gave presentations in their respective areas of research and participated in panel discussions.

SVOTS President, the Very Rev. Dr Chad Hatfield serves on the Advisory Council of IOTA, and was a panel member for a roundtable discussion on Theological Education in the 21st Century, which centered on the discussion of Christ’s instruction to “make disciples” (Mt 28.19). Fr Chad also spoke regarding the recent efforts and achievements of St Vladimir’s Seminary in a session entitled “Co-laborers.”

Academic Dean, Dr Ionuț-Alexandru Tudorie serves as co-chair of the group, Romanian Orthodoxy, with the Rev. Dr Radu Bordeianu, and participated as a panelist in a book review session held by the group, on Marco Guglielmi’s The Romanian Orthodox Diaspora in Italy: Eastern Orthodoxy in a Western European Country. He also chaired the group’s session entitled “Romanian Orthodox Perspectives on Mission.” This session featured a presentation by Associate Professor of Patristics, the Rev. Dr Bogdan Bucur, on the topic, “Re-Learning Christianity with Fr Nicolae Steinhardt: Insights from The Journal of Joy.”

Dr Peter Bouteneff, Professor of Systematic Theology, was featured in the filming of IOTA Talks, short videos in which Orthodox scholars share their work to engage non-academic audiences in the exploration of theological topics. He was also a panelist in a roundtable discussion for the Science and Orthodoxy around the World (SOW) project on environment and evolution, and presented a paper entitled “Rethinking Ontotheology: Towards a Constructive Dogmatic Theology” at the session moderated by the Dogmatic Theology Group, of which he is co-chair with Rev. Prof. Nikolaos Loudovikos.

Assistant Professor of Canon Law, the Very Rev. Dr Alexander Rentel serves as the Interim Chair for the Canon Law and Pastoral Theology group, and presented his paper, “Words of Primacy in the Canons,” in the group’s session entitled “The Role of Canon Law in the Life and Mission of the Orthodox Church.” He also chaired another session hosted by the group, on the topic “The Challenges of Pastoral Theology in the Contemporary World.”

The Very Rev. Dr Sergius Halvorsen, Assistant Professor of Homiletics and Rhetoric, presented as one of three speakers in a session entitled “Academic and Ecclesiastical Freedom: When to Speak the Truth in Love”; Fr Sergius spoke on the topic “An Orthodox Christian Rhetoric of Humility.” He also gave a paper titled "The Liturgical Homily as Sacred Art" at the Orthodox Theological Society in America (OTSA) annual meeting, held on Tuesday, January 10, prior to the beginning of the IOTA conference.

Professor of Philosophy and SVOTS Trustee Dr Ana Iltis presented her research on the topic “Innovation and Translation in the Biomedical Sciences through an Orthodox Lens,” at the Science and Theology Group’s session entitled “Biomedical Issues and Christian Anthropology. She was also featured on IOTA Talks, recording a video entitled “Responding to Suffering by Causing Death: Medical Aid in Dying.”

The Liturgical Studies Group was chaired by Dr Alexander Lingas, Professor of Music at St Vladimir’s Seminary; he moderated the session, “The Liturgy in History”. At the session entitled “Contemporary Themes and Challenges of Liturgical Studies”, he presented the paper “Orthodox Liturgy and Liturgical Music in the Concert Hall”, exploring questions of mission and spiritual formation beyond the boundaries of the institutional church.

Assistant Professor of Liturgical Theology, the Rev. Dn Dr Vitaly Permiakov was also in attendance, and participated in sessions held by the Liturgical Studies Group.

SVOTS students Fr Anthony Gilbert (M.Div.’23) and Fr Alexander Earl (M.Div.’23) each presented their own research during the conference. Fr Anthony presented his paper, “Come and See: Orthodox Mission, Literature, and Metanoia” in a session given by the Orthodoxy and Literature Group, entitled “Orthodox Literature as Mission”. Fr Alexander spoke on “Platonic Relationality and Trinitarian Hypostases in St. Gregory of Nyssa: Revitalizing an Ontology of Communion” during a session entitled “Dogmatic Theology for Today”, held by the Dogmatic Theology Group.

Conference participants came away expressing gratitude for the opportunity to discuss current issues facing the Church from an Orthodox scholarly perspective. Dr Legaspi had the following comments: “The time in Volos was exceedingly valuable. Conferences like this one provide opportunities not only to discuss scholarly topics but also to learn about the many challenges facing our churches around the world. I came away with a much broader perspective on Orthodoxy in our current moment and new inspiration to serve God faithfully in our scholarship.”

Future conferences being planned by IOTA include “The Faith of Nicaea,” in commemoration of the 1700-year anniversary of the first ecumenical council held at Nicaea in AD 325, to be held in 2025, and IOTA’s third mega-conference, projected to take place in the Republic of Georgia, in 2027.