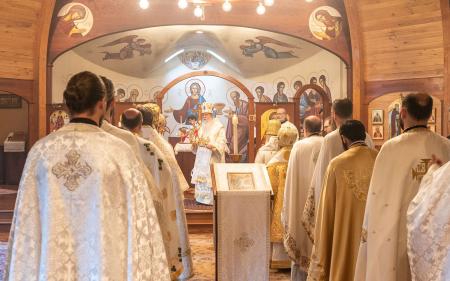 2022: By God’s grace, St Vladimir’s Orthodox Theological Seminary (SVOTS) grew and expanded in multiple areas. A few highlights were: accepting the largest student body (43) in recent history for the Fall 2022 semester (the entire student body, across degree programs totaling 101 seminarians, including 14 women), rebuilding seminarian scholarship funds on Giving Tuesday, and starting the development of online Orthodox theological courses and continuing education for clergy nationwide. As always, the primary mission and focus of St Vladimir’s Seminary continues unchanged: to train priests, lay leaders, and scholars to be active apologists of the Orthodox Christian Faith—focusing on academic rigor and spiritual formation within a residential Orthodox community.

JANUARY: On the feast of Theophany, SVOTS President, The Very Rev. Dr Chad Hatfield blessed the Seminary “Troublesome” Creek as part of a festal procession through the campus.

JANUARY: A large group of seminary faculty, staff, and students traveled to Washington D.C. for the annual March for Life.

JANUARY: His Beatitude, Metropolitan Tikhon of All America and Canada led the SVOTS community in celebrating the Synaxis of the Ecumenical Teachers and Hierarchs, Basil the Great, Gregory the Theologian, and John Chrysostom, the patronal feast of the campus chapel.

JANUARY:  The 39th Annual Father Alexander Schmemann Memorial Lecture was given by The Rev. Dr. Khaled Anatolios, who spoke on “Salvation as Liturgy: Alexander Schmemann’s Liturgical Theology and the Renewal of the Joy of Salvation.”

FEBRUARY: The seminary community joined Fr Chad in a “house blessing” for the entire SVOTS campus.

MARCH: Seminarians saying the Prayer of St Ephraim during Presanctified Liturgy in the first week of Great Lent.

MARCH: World-renowned iconographer, Dr George Kordis gave a talk entitled “Tradition and Innovation: The Theology of Rhythm as a Guide in a Sea of Creative Possibilities” at an academic roundtable hosted by the Institute of Sacred Arts.

APRIL: Seminary students and community members participated in a unique, four-day icon-painting workshop given by Dr George Kordis as part of his tenure as an artist in residence with the Institute for Sacred Arts for the Spring 2022 semester.

APRIL: Seminary children sang the Troparion for Palm Sunday in preparation for the festal procession.

MAY: Commencement - the graduating class of 2022 with His Beatitude, Metropolitan Tikhon, visiting hierarchs, and faculty and trustees of St Vladimir’s Seminary.

AUGUST: Education Day was held online via Zoom; the event featured six hours of presentations conducted by SVOTS faculty members, was attended by hundreds online, and raised over $47,000 for seminarian scholarships.

OCTOBER: Over one hundred teens and parents gathered at St Vladimir's Seminary for a Teen SOYO retreat, during which ten SVOTS seminarians from the Antiochian Archdiocese and three from the Orthodox Church in America (OCA) shared their experiences at the seminary.

OCTOBER: Seminary families gathered for the annual Fall Festival, which included a chili cook-off, games and crafts, and a children’s costume contest.

NOVEMBER: In one of several ordinations held at Three Hierarchs Chapel this year,  3rd year M.Div. student, Dn Alexander Earl, was ordained to the priesthood by the hand of His Eminence, the Most Reverend Alexander, Archbishop of Dallas, the South and the Bulgarian Diocese of the Orthodox Church in America (OCA) on Sunday, November 6 - the commemoration of the seminary’s reception of the relics of the Holy Prince Vladimir, Equal to the Apostles and patron saint of the Seminary.

NOVEMBER: Faculty dish up Thanksgiving dinner for seminary students and their families, in a longstanding SVOTS tradition.

DECEMBER: Seminary children gathered at the Metropolitan Philip Auditorium for a special visit from St Nicholas (played by a seminarian)!

DECEMBER: The first post-pandemic Christmas Concert was performed by the St Vladimir’s Seminary Chorale, under the direction of Dr Harrison Russin, singing “Hymns of the Nativity,” a selection of Christmas hymns and carols from various traditions to celebrate the Birth of our Lord and Savior, Jesus Christ.